An extract from To Everything a Season: the View from the Fen: 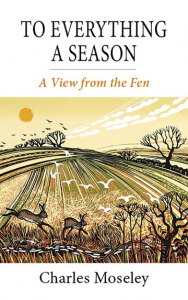 I was on one of my regular Autumn visits up north, and once again was standing on a hillside in what used to be (and still is, for us who grew up knowing the loved old names and identities of the ancient shires of England) Westmorland – the Western Moor Land. They call it Cumbria now: a neither fish nor fowl name that has the single merit of reminding us that here was once the territory of the Welsh-speaking Cymry. I know this patch very well: in fact I think of it as my home patch, long exiled though I have been in the south, and I return time and again like a homing bird. An honorary uncle of mine was Vicar of a parish in the next valley that leads to Kendal, and I have known this dale since I caught my first trout in the bend of the river below where I stand on this clear cold day. It was only a small one: and my father’s rod was not a proper trout rod, but I can still remember the physical thrill, the sudden going up a gear, as it took my fly in the pool below the rapid at Rigmaden with an energy that astonished a boy used to the more stolid (if larger) fish he caught off Blackpool’s North Pier. Life-changing.

High above me two watchful buzzards mew to each other as they spread their primary feathers to finger the wind, and scribe their irregular ellipses in the sky.  A cock pheasant calls from the covert below me. A stream runs through that wood to join the Lune, and in season sea trout make their way up almost to the trickles at the edge of the moor to spawn. I found an exhausted cock fish once up there, the water too shallow to cover his back, and gently lifted him and carried him down to a deeper pool. I hope he made it back to the sea, and food. But he would be one of the lucky ones if he did.

I love this land. I love its cycles of being, year on year, in all their rawness – for the life of the fields and moors is not a pretty, cosy thing, but tough and costly. The cycle of life is costly. The sea trout often die when they have spawned; pretty little lambs can die of cold, or their ewe’s neglect, or get fly strike from the green-backed flies in summer, or fall to a fox’s stealth as the spring evening softens to dusk. The flies’ maggots literally eat them alive. The carrion crows wait to peck out the eyes of dead sheep or rabbits, or stranded lambs. But getting to know a patch of countryside really well over many years in all its sunny and dark moods – well, it deepens and changes as you yourself change, coloured by memory, by increasing knowledge and understanding of how it worked, and works – and by acceptance that suffering and death are as natural and necessary to us as birth and the happy couple’s love as they sit under the apple blossom in the farm garden.   For what our urban-dominated mindset calls merely ‘countryside’ is a dynamic place, a palimpsest of memory and human experience. That is true anywhere. In this valley people have lived, worked, loved, died, since hunters first followed the animals who moved north into the new tundra as the Great Ice retreated. They have left their marks and memory. From where I stand on this hillside I can look west across the valley and see the moraine dumps the last glacier left, cut through by the then more vigorous Lune. Once it was a violent, overmastering, meltwater river draining the water melting from the little relic icecap left on the Howgills, carving through the rocks of the earth as if they were butter. Even then men would have hunted here, preying on the herds of reindeer that grazed on the colonising lichens and mosses. You can see people’s traces too: the westering sun, when it is low, picks up and shadows round the ghosts of farmsteads that date back to the Iron Age, if not before. They are barely perceptible as you walk over them save in the odd patch of greener grass, and in the ghosts you think you can hear keening in the wind. The lines of the stone walls that net down the heaving of the hills – well,  some of those may well go back to the very first Neolithic farmers who came to tame this land; some are a few centuries old, merely. And many of the sites where sit the modern white farms, which visitors love to photograph, are as ancient as the hills. Why leave a good spot, where you have water, and shelter, and good land?

Constant use, constant change, signatures scribbled over each other… The becks that come down from the high moor in these deep ghylls are fringed by trees, and each almost into living memory had its little mill – or more than one – driving the hammers of fulling mill and the bellows of forge, or the quiet patience of small-grinding millstone. How old? who knows? Below where I stand, a leat once led the water to a pile of stones that was once a hat factory – they made the felt from the local wool, but it was never as good as the true beaver from Hudson’s Bay.  Across the valley another leat fed the first hydroelectric plant in England. The rent for this manor in the middle ages, payable to the lord of Kendal, was a ‘cast of falcons’ – that is, a pair of peregrines. Peregrines still do well on the crags above Dent: and gamekeepers, wiser now than once upon a time, let be their stooping. (I used to think it was always deadly, accurate as a well-fired bullet, but apparently they only kill about 10% of the time: they are going so fast they can’t cope with a quick jink form a pigeon.) The farm that paid that rent is still there, noisy with sheep in due season and with dogs at all times. Remains of its fortifications are still obvious: the Scots were troublesome visitors along this road south. A fourteenth century arched door opens to a room with a large TV and armchairs.  Forty years away behind it, once upon a time, a steam train chuffed up the slow incline on its way to Kirkby Stephen Lower and then beyond to the coal of Durham. Sometimes I think I hear it.

Look there, deeper into old time: look over the tops of the trees in deep Larum Ghyll, and beyond, on the hillside where the soil was more cultivable to ancient ard ploughs than the heavy land of the valley bottom, there you see outlines of those ancient fields, and a shadow of a ring that once enclosed a Bronze Age barrow. Lower down, you can find the upright stones, rubbed smooth on their edges by generation upon generation of sheep, of a kist burial. Someone has put a metal feeder for the sheep exactly in the rectangle of stone where the body lay. Who was he, or she? Who knows? Except that she was of like passions with us, felt cold, hunger, got ill, had children, died, and was afraid of the dark of that land from which no traveller returned. Like us.  And she or he was our relative.

It is Autumn now. My Autumn too. The boy running around the fields where it was always summer and bringing milk in an enamel can back from the farm down the high-hedged lane to the Vicarage was a long time ago. But I would not have it any other way, for his in-the-moment ignorance did not notice much that was not under his nose.  The beeches in the ghylls still are rich in their dull copper leaves. They will spend them in the wild extravagance of the winds that will surely come, when last year’s glory will whirl down to form the mould from which new trees will grow. I shall be mould myself one day, like the mould drifted under the hedge I stir with my stick. So be it. Fertile, I hope.

Contact me here to register interest in the launch or in buying a copy.