An extract from Crossroad: A Pilgrimage of Unknowing: 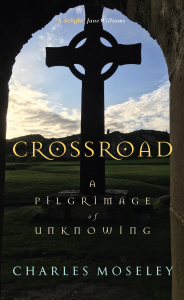 One day when late summer was turning into Autumn, one of my dearest friends and his brother, both now dead, took me miles along the shifting, sounding shingle of a Norfolk beach back to their childhood. The two men seemed to find the hard going less tiring to their elderly thighs than I did to my much younger ones. But then, they were used to it: when boys they had spent summer after summer on a boat moored where the shingle spit then ended and finally allowed the little river to mingle its waters with the sea.

The Yankee had begun life as a humble little coaster, carrying cargoes, as they came along, between the now quiet harbours around the Wash. She had come pretty much to the end of her economic life by the end of the First World War, and had retired to be a houseboat, moored in the shallow water inside the spit. The water left her on spring ebbs, and did so more and more as the silts built up over the years. The family had a couple of little dinghies, Norfolk flatties, single masted with a lug sail, that a young lad of ten or so could handle well enough to go safely across the estuary at slack water on the top of the tide to get milk and things from the shop in the village: much quicker than the two hours and more of walking right round. At each low tide when the estuary emptied, the banks of shining mud were noisy with feeding birds, with the piping of oystercatcher and redshank, and the harsh ‘kria’ of the terns – some call them sea-swallows. On the storm beach the ringed plovers made their invisible nests and in the dunes you might – still can sometimes – see a harrier. When, each summer’s end, the family padlocked the door, dropped the key off at the shop in the village, and left for another academic year, the first wintering geese would be beginning to arrive from the high North.

Times change. Families fly off to different nests of their own. Wartime comes again, when the spit becomes once more a restricted area. Only men in khaki uniform, keeping uneasy watch for what might come from the sea, join the birds and rabbits in the wind off the North Sea. The Yankee settles a little more comfortably into the mud, and only the highest tides of equinox with a northerly behind them now shift her slightly. The fine sand blows along the shore and in big storms forms dunes that slowly march westward, ever westwards, taking the spit to far, far beyond where the high tide once raced round the point and on the ebb left the low flats where the seals could bask. The Yankee’s woodwork decays or is scavenged for campfires, her iron ribs grow dark brown and swell with rust. But she is still recognisably a boat. For a time.

I followed the two men as they climbed over the dune, and looked down, across the shining low tide mud, with the silver channel of the river snaking in the middle. At their feet the few ribs stuck up through the marram grass and silverweed. You could see there had been a boat there. By her stern the marsh plants, shrubby sea blight (sueda vera), sea lavender, sea aster, sea purslane take over and wade out to where the water often comes. Rabbit scrapes in the sand, and rabbit droppings, show how busy the place is when we are not looking. Dry whitened shells, bits of shelly crab legs on patches of close-nibbled grass hint at the feasting of birds. There is a tide mark of brown grass stems and bits of blackened seaweed. The tiller still pretends it directs the boat as she points into the dunes. The two old boys move around the wreck, talking happily about where things were, about the time before… about their parents, their father correcting examination papers all summer day long, to be taken eventually to the railway station in the village and sent back to the University: and they talk about their brother, accidentally shot dead on a wildfowling trip when a boat suddenly lurched.  One of them stands at the tiller, as once he did before. But she won’t answer their helm any more. At least, not in a time I can get to.

We ate our sandwiches, sitting on the dune above the wreck. The brothers were quiet as ghosts, hearing undead voices in another wind. One smoked his ancient pipe, silent, looking at the past. But soon the wind blew cold, and the sun was going down. Time to go, soon.

Why did Henry and Norman take me along those bitter-sweet miles of shingle to show me the wreck? A man I revere, who taught me much more than he thought he did, once wrote that perhaps in Heaven he would be able to take his friend on a walk round all his favourite childhood spots in the sweet country of County Antrim – drumlin country too, like that round Kendal, as it happens.  But, for now, you can’t resurrect the people and animals you knew, or introduce them to new friends, however much you want to. They have gone from this age of the world. You know that the place to which you go back will always have changed – sometimes so radically that only little fragments remind of what used to be there, like the bare rotting ribs of the beloved houseboat just poking through the engulfing sand as the long sigh of the tide draws back. You know you cannot see with the eyes you had years ago. You are yourself a ghost: you knew the place, the people, so well, and nobody now knows you. But I know that when I go now, alone, trudging along the shingle to watch the seals on the point, those two boys, both now dead, sailing their flatties, and the slow lift of the Yankee as the tide makes, and the kettle beginning to sing on the coal stove, are, in my memory, now as if I had been there then. They are as real as was the scent of tobacco from that villainous pipe, blown away on the wind from the sea. The presentness of the past is in all I see: sometimes more real than the actual.

So what is it that draws you to return to a place in fact or in memory, or to journey to a new place where others have already told something of what you will hold as memory? Is it a desire to – shall we say? – reboot? To touch base with where you seem to remember you were happy? To go back to a time before the choices, and choices, and choices – not all our own – made problematic Now inevitable? What were the other once possible scripts, scenarios? Is it a longing for a simplicity you lost when the child ceased, ever so subtly, to be childlike? Or is it – it could be all of these of course – a sort of pilgrimage more or less consciously made to the ancient powers that once guided, guarded perhaps, your little world and set up the mould by which you still judge reality, consciously or not? Or where you might find a sort of unison in the discord of conflicting voices in which we live day to day, and go forward with new understanding?  Is the end of all our travel an arrival where we started, knowing the place for the first time? Or – and more and more I come to think this is a clue to the answer – is our return to the loved places like swinging the compass on a boat about to go to sea, so that you will have a true bearing for the voyage ahead over unpathed waters to undreamed shores?

Contact me here to register interest in the launch or in buying a copy.