Inward journey, out to Iona.

We have just got back from Iona, after a long but trouble-free drive from Bunessan on the Ross of Mull to this Homely House on the edge of the Fen: twelve hours tent to door, from single track roads where Highland cattle stared at us intruding on them (or got slowly, with stolid calm, out of our way) to the thickening soup of lorries in a hurry, clotting at junctions, and eventually the acres upon acres of the new A 14. (‘Your A14’, the signs tell us, as they remind us that they are ‘Working for You Even Out of View’ – so kind!). But the breakfast on the ferry from Mull was good – super black pudding! – and three porpoises performed off Craignure, busy about their business in their other world. 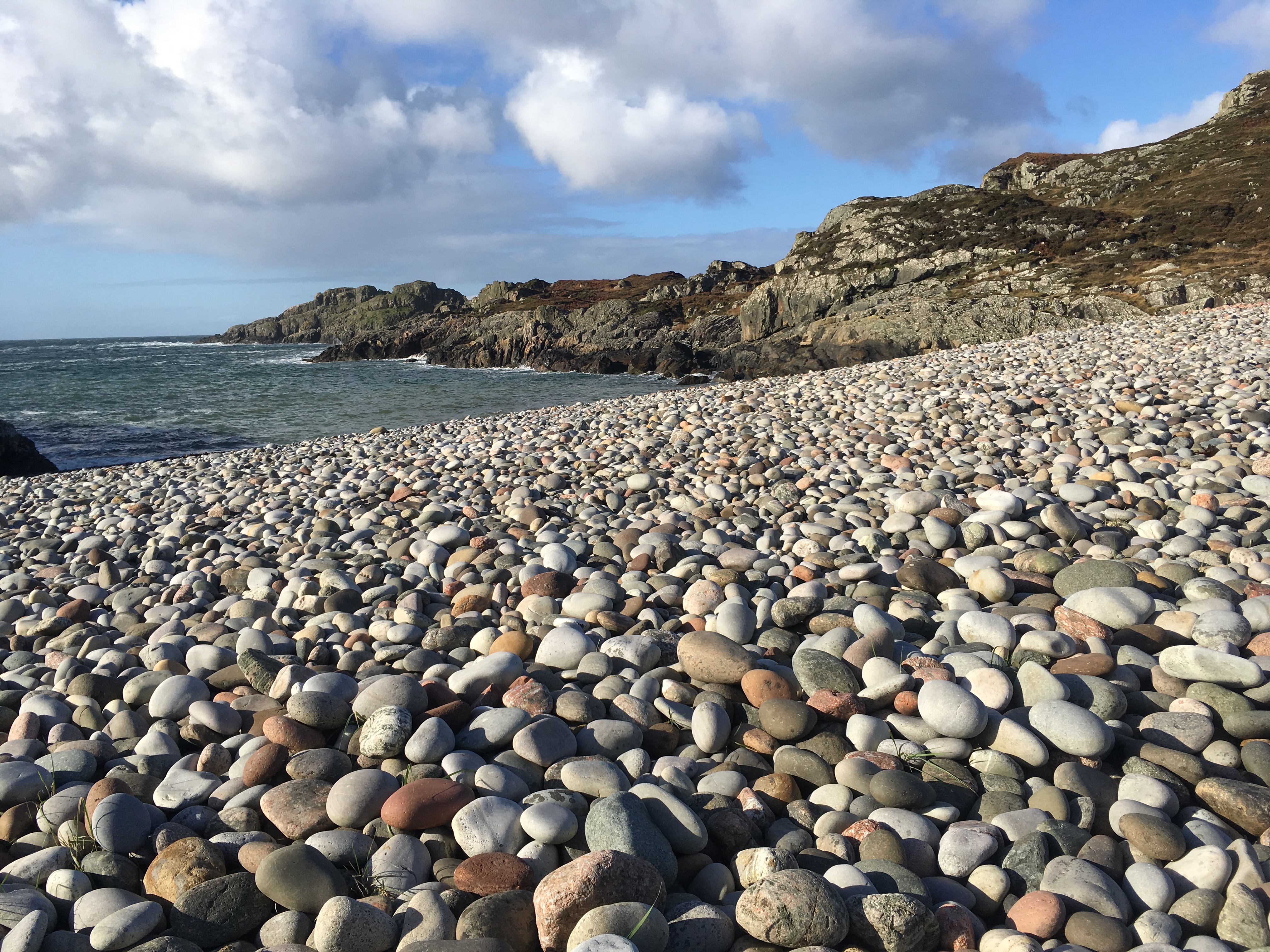 We have had a wonderful, profound, trip. The Catholic House of Prayer is a simple, quiet, unquestioning, welcoming place within sound of the sea. Simple food, not much talk. In the little icon-hung oratory before breakfast there is a short early morning devotion for those who want it. Our fellow residents were Roman Catholic, Buddhist, Church of Scotland: and us, Anglo-Catholic. The two of us, as is our wont, had some long quiet walks, mostly in silence, including our favourite to the bay where Columba landed in 563 – a sacred place indeed. Many so find it. There is a labyrinth of stones, furred by the green turf, which looks like it has always been there. 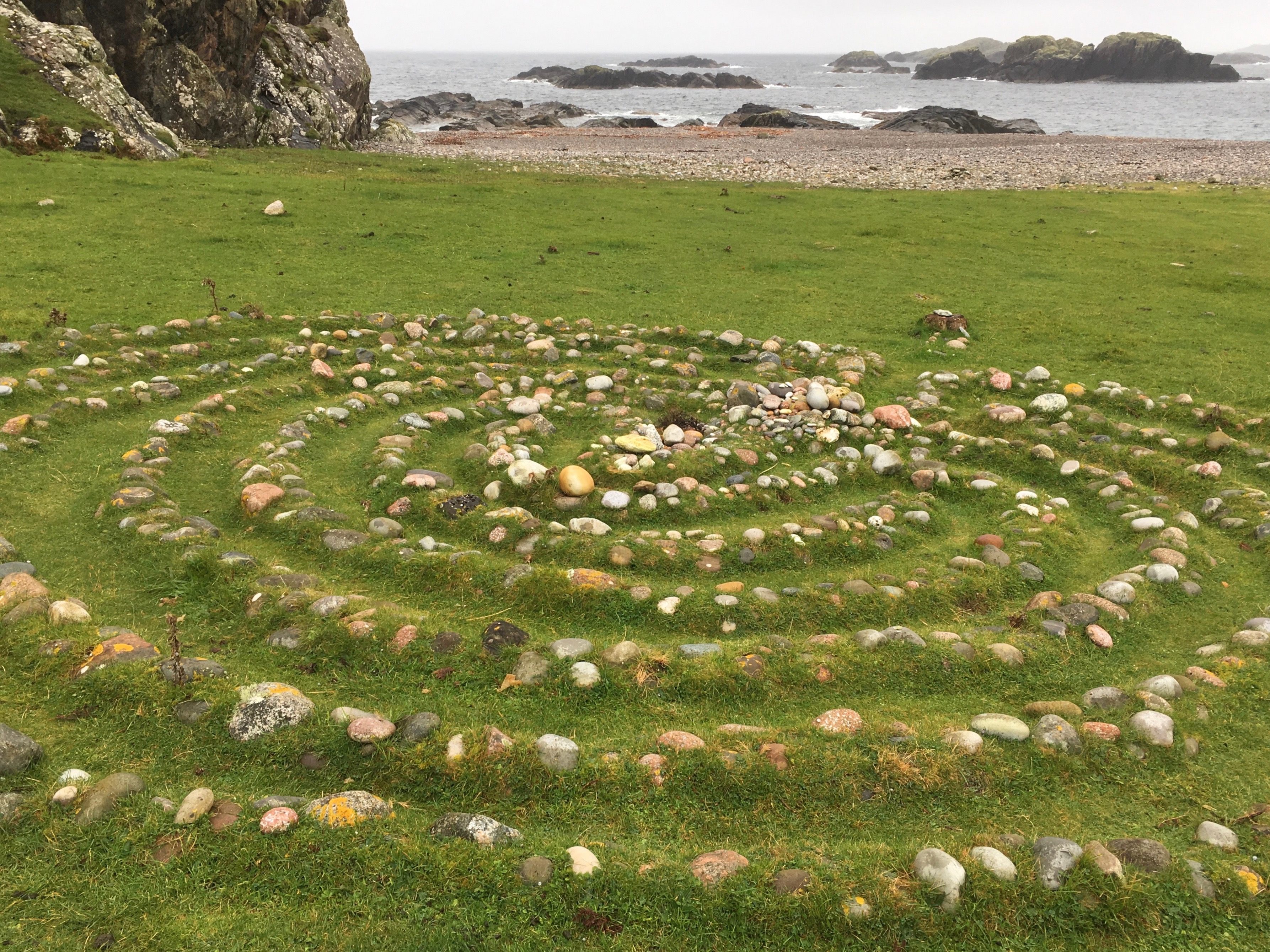 It may not have been, but labyrinths are very ancient symbols indeed of the paths we have to tread before we find whatever it is that waits for us at the centre of all things. We walked it, of course, and at noon sang the Angelus together, Rosanna’s alto circling round my bass. We placed a little cairn of beach stones for our darling departed dog Hector, for this was one of his happiest beaches. It will last until the gales of winter blow what we made away, but its stones will remain for others to build their memories. Over the hill, on the machair facing the Atlantic, the rain-washed sheep and cattle munched quietly in this quiet island. 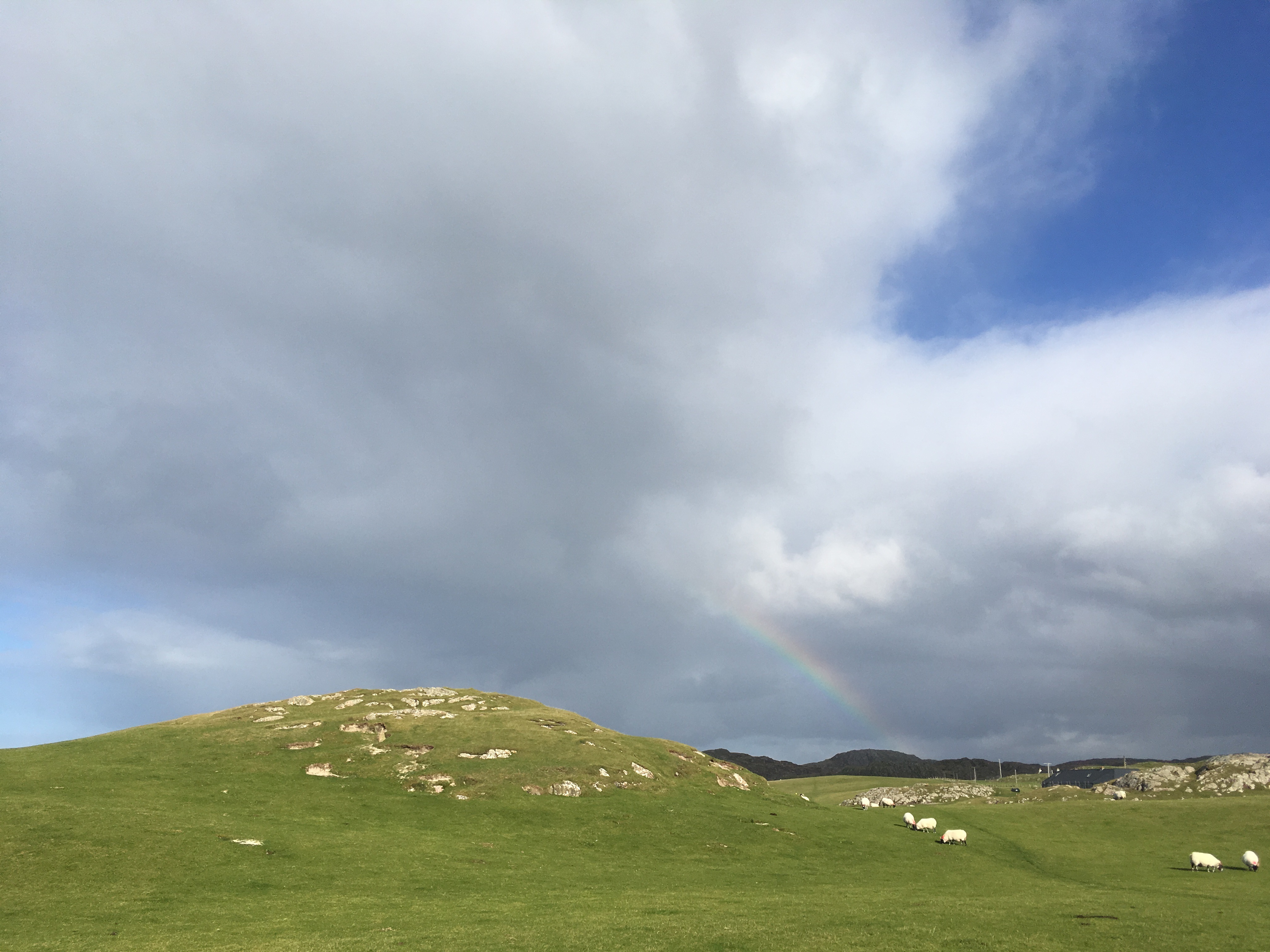 The open soft turf is overlooked by a little grassy sidhean – a place, they say, where the worlds intersect. In more ways than one, perhaps: fairy hills, hills of angels – call them what you will – but also some of the very oldest rocks on earth juxtaposed with some of the very newest. 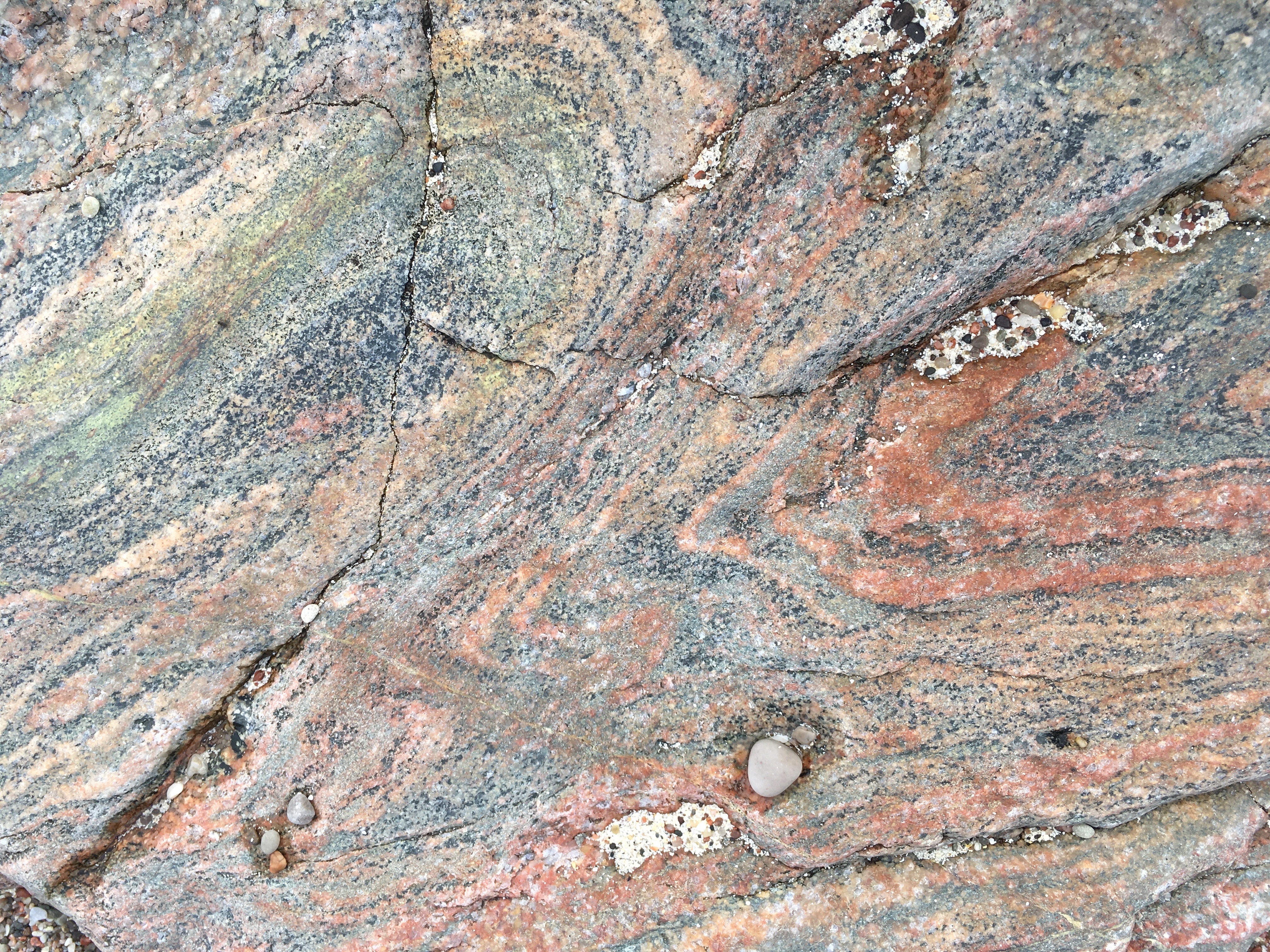 On rocks that were old long before the worlds of the ammonites and dinosaurs and trilobites, long before the earliest organic life, here we stand (creatures of a passing but infinitely important moment) understanding their long perspectives just as we can number the flaming stars. Those circling stars were as sharp to my old and dimming eyes in that clear air off the sea as they were to my clear but thoughtless sight when I saw them in boyhood from the deck of the trawler in the dark of the mid-Atlantic night. We climbed Dun I for the wonderful view south to Jura and Islay, and north to Staffa and the hills of Skye, with the bulk of Mull’s Ben More over the wind-combed sound to the east. 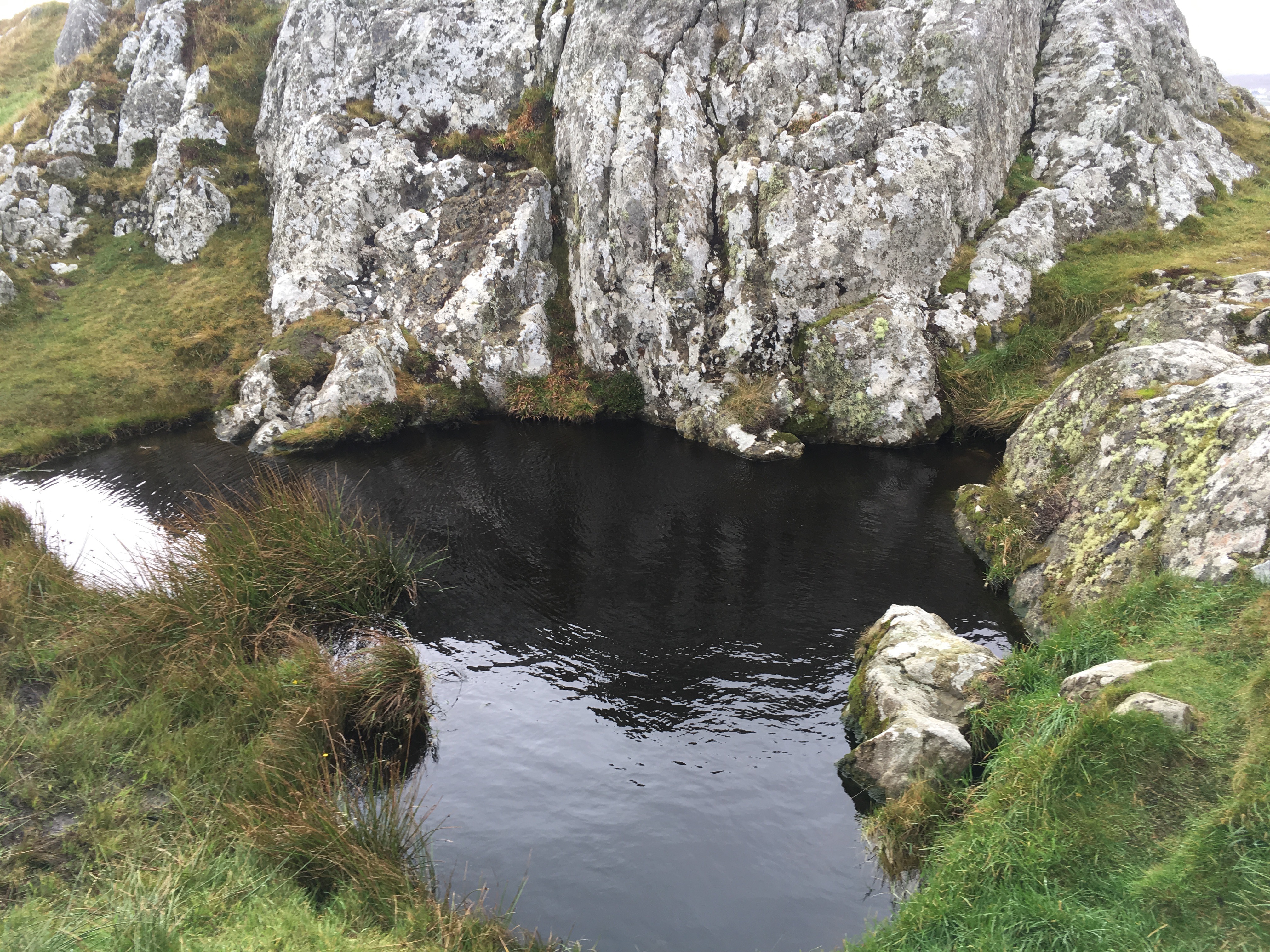 We took of the water of the Well of Healing just below its summit (summit? I suppose so, even if only 300 feet high) as our friend, my old pupil Matthew, had told us was his own custom on his yearly visits. Of course we spent time in the Abbey: My Lady of the Needles in her favourite silent spot of intercession among the votives in the south transept, me in the dark solitary silence of St Michael’s chapel, or in the tiny shrine where fifteen centuries ago Columba was buried. 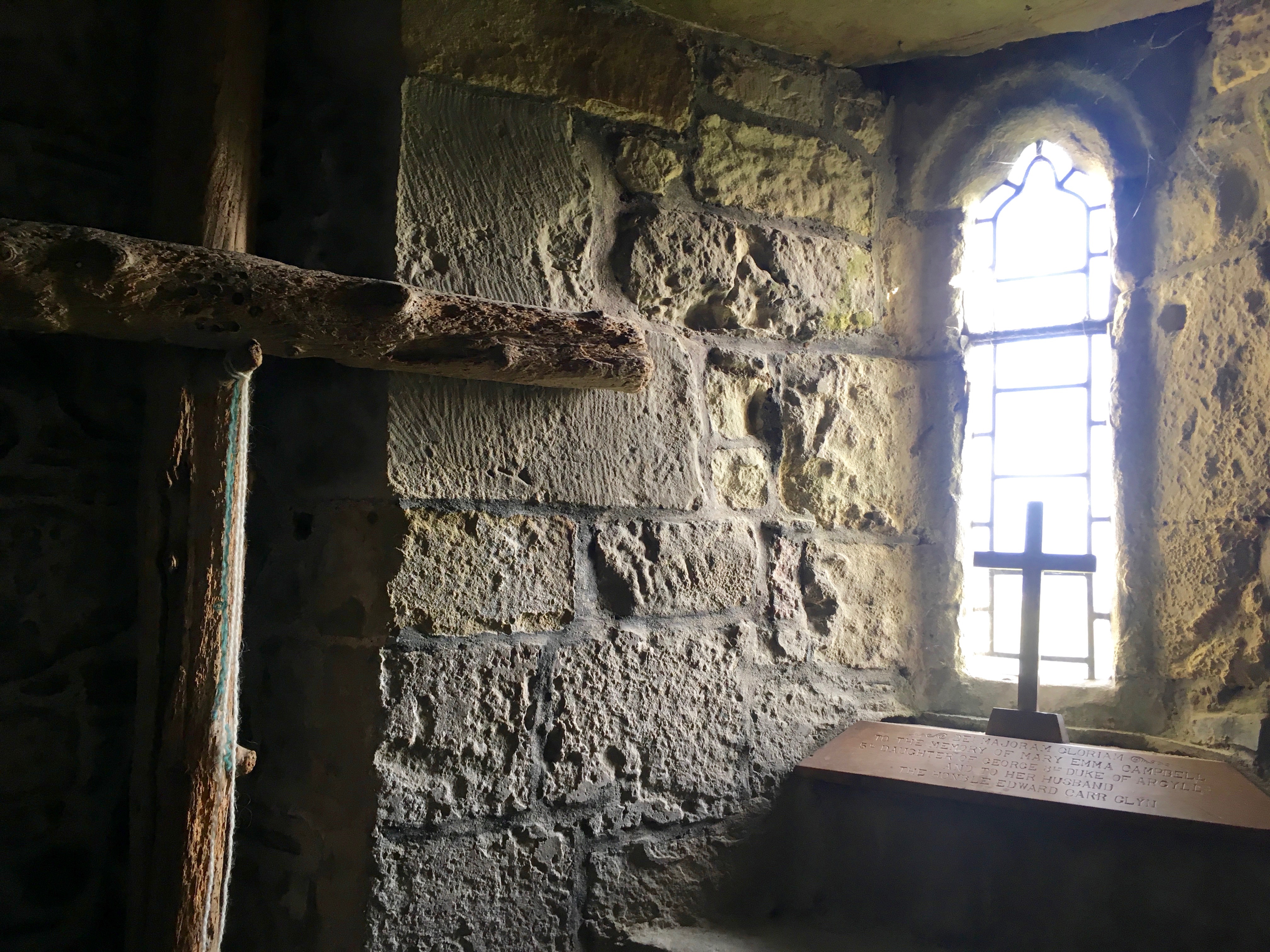 This is a place of energy: you can feel it, palpable, pulsing out into the world that so needs the healing and reconciliation it can give. It was hard to get on the early ferry to come back to a less real world of busy-ness and imperative irrelevance. For the rocks remain when our earthly selves shall be merely a memory. Shaping those selves may be what it’s all about.

It was a brilliant idea of My Lady’s to buffer these few days with a few less intense days on Mull. The yurt was capacious, noisy in the wind and rain (usually at night), but comfortable enough. 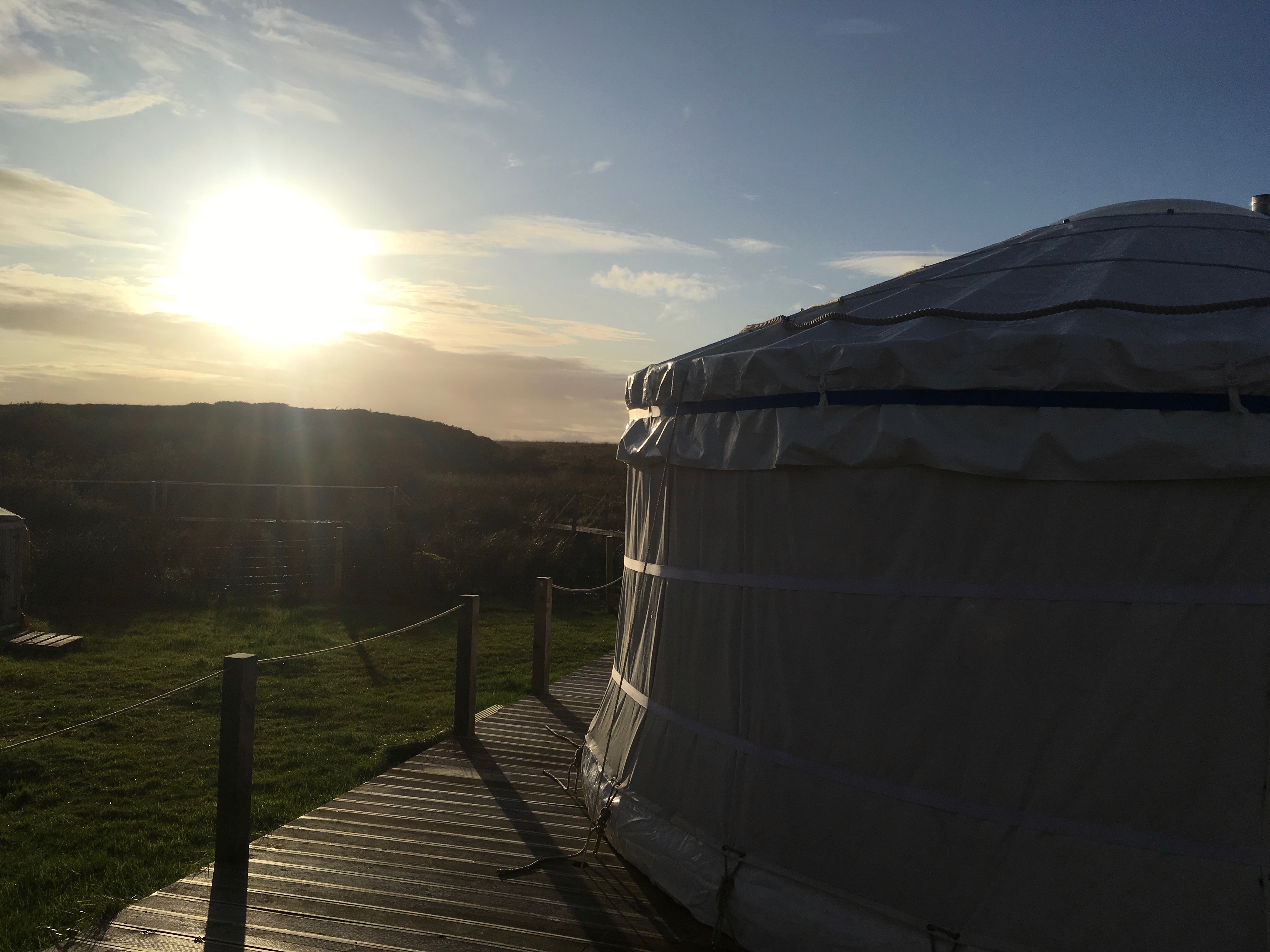 No phone; no email; no web: just reading and quiet. She reads to me, you know, and we had taken some Barbara Pym, with her wicked take on middle class AngloCatholicism (it never does to take oneself too seriously) and male self-importance (ditto). But we had also taken a book (which I found utterly profound) recommended to her by a friend, which I would urge everyone approaching sixty to read – one may – may – not be ready before: Richard Rohr, Falling Upwards. I also finished one wonderful, revolutionary, book, Wilding by Isabella Tree, and started another, James C Scott’s, Against the Grain, which demolishes the usual narrative of how civilisations began and what they have supposedly given us. I was myself already halfway to the radical position he takes up as a result of reading up about what is coming out of the diggings at Goblecki Tepe and Ness of Brodgar, and re-thinking what Ian MacGregor said about the Standard of Ur in the British Museum, and of work on mitochondrial DNA. 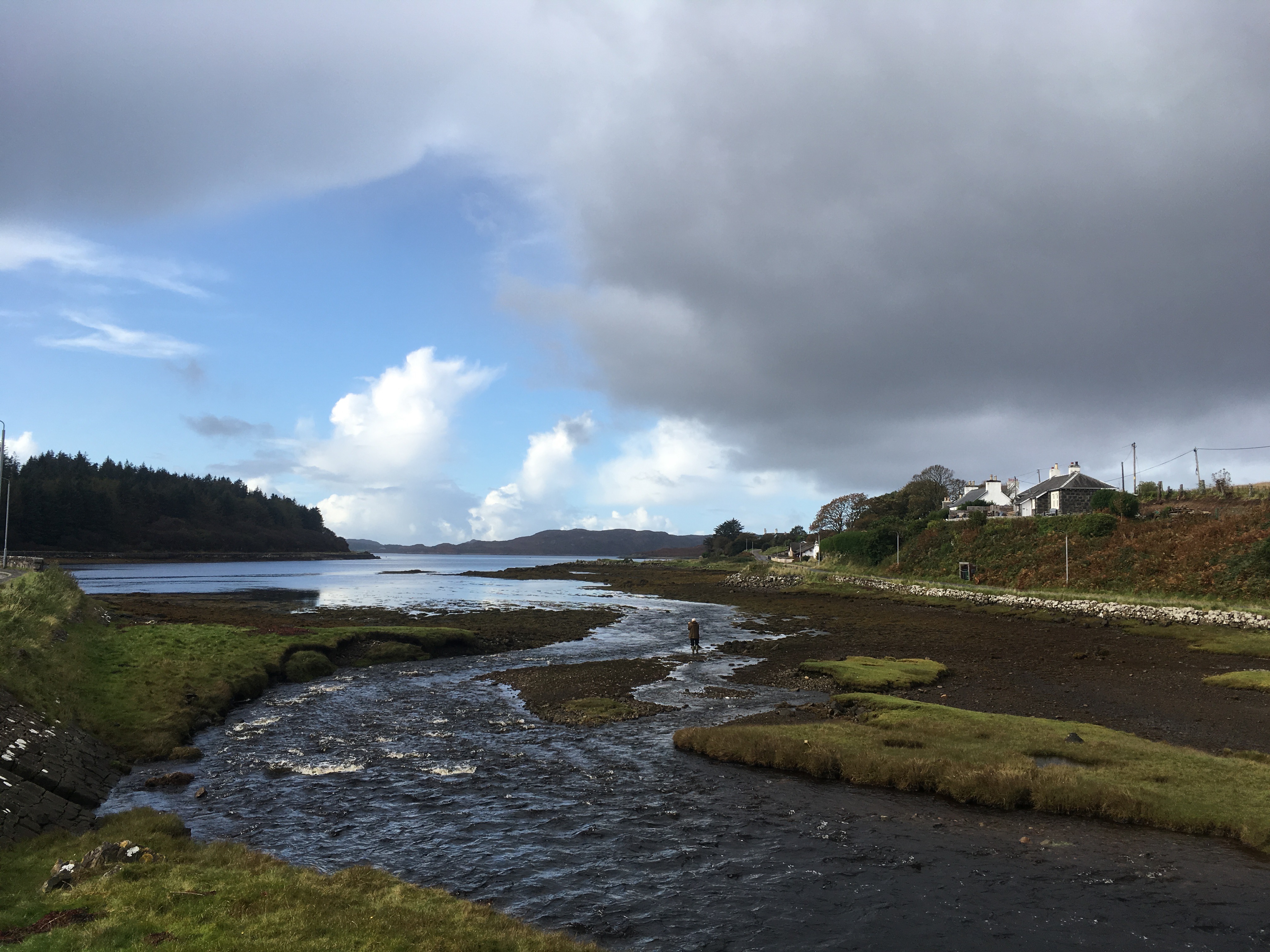 I did get some fishing: a fine energetic mackerel that did for our supper and a host of annoying little pollack who were too small to be out without their mothers. The loch was hard to fish in an onshore wind, but I did get a salmon in the river at Bunessan, taken on a really vulgar fly I was almost ashamed to offer. The trouble is, the fish was very young and foolish, and on its way to sea, where one hopes it will feed up to grow beyond its current six inches. So I sent it off with my blessing and thanks for being a spirited little fellow. 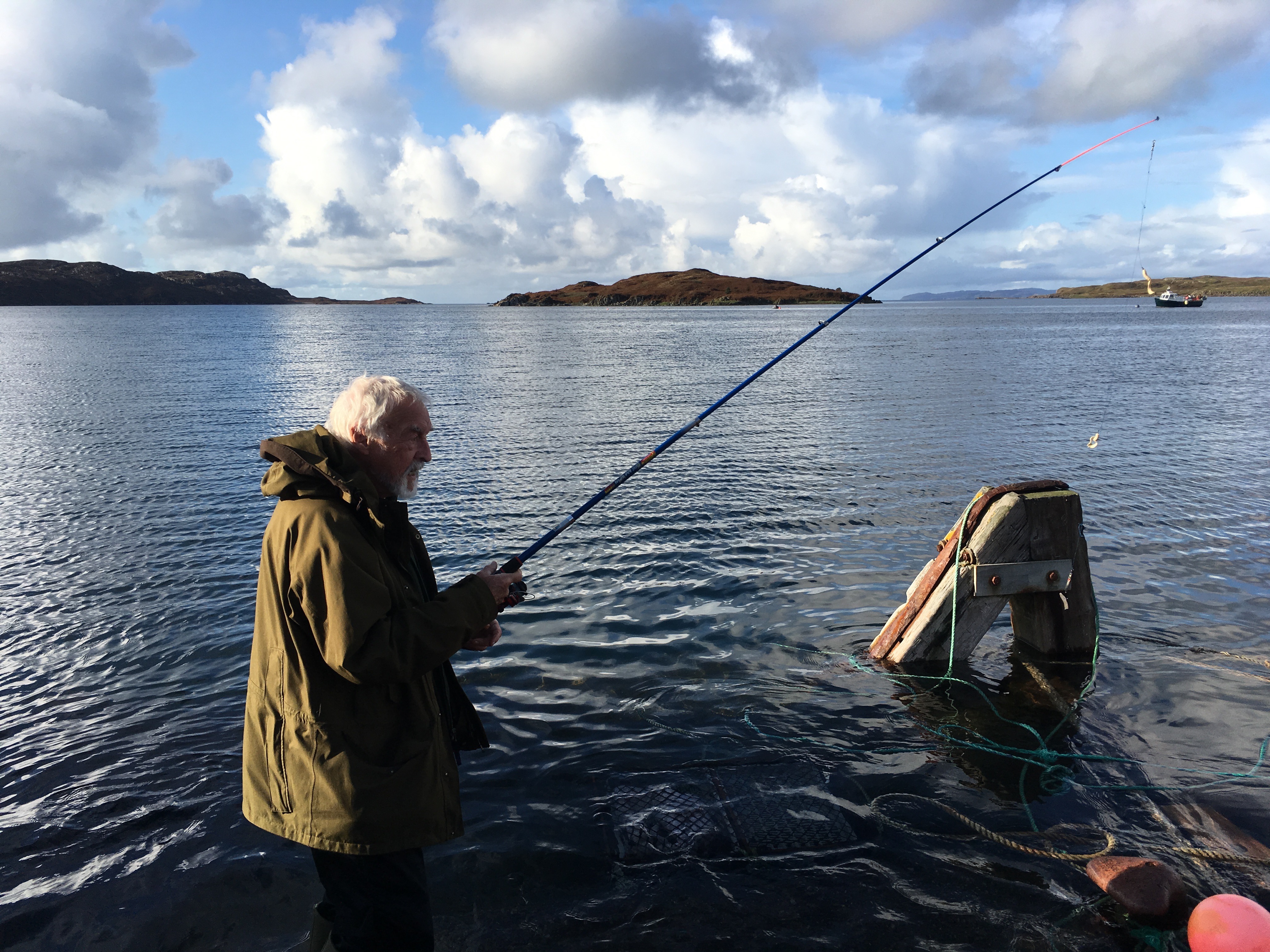 The sky above our yurt was visited by a golden eagle; and the sheep stood round, munching, looking at us as we washed. They were friendly enough, even if their conversation is limited to bass baas and treble bleats. (By the way, do read that wonderful book by James Reebanks, The Shepherd’s Life. You will never look at a Herdwick ewe in the same way again.)

And so back to The News, to the stupendous irrelevance of the things that so many measure their lives by, to the serial dishonesty and lack of honour in the current bunch ruling us, to the refusal of the really powerful to face the really big issue that makes all politics and business laughable – that imminent, inevitable, catastrophic change in climate that will engulf them as well as everyone else. They have stolen our dreams, indeed, as the excellent and brave Greta Thunberg said. But Iona is one of those places where you realise the deep truth of those ancient words of Lady Julian, writing in her cell in Norwich nearly six centuries ago, when drastic worsening of climate, inexplicable plague, war and sudden death stalked the world: ‘All shall be well, all shall be well, all manner of thing shall be well’. We may not understand how, but that does not mean she was wrong. Just let us lift our eyes from the mud our feet are – o so comfortably! – stuck in, where ‘we know what we have got to deal with’, and see the sunlight lighting up the distant hills. There is a journey. The rocks remain.