Three visits, in four days. The first, on a day of sun, and joyful wind, and light as clear as the morning of the world, to Tantallon Castle, on the south side of the Firth of Forth, overlooking the Bass Rock. Its ruined walls stand tall on its headland, commanding what was once the main seaway of Scotland’s kingdom.

Cities and Thrones and Powers

Almost as long as flowers,

The wind sang in the unmown grass – all flesh is grass – curing in the dry moat into hay that would never be mown, and the martins hawked for flies in the updraughts by the high walls where once watch was kept. Two especially we watched, for clearly they were mated.

‘This castle hath a pleasant seat; the air
Nimbly and sweetly recommends itself
Unto our gentle senses.’

And Banquo replies to King Duncan in some of Shakespeare’s happiest summer lines, guessing no more than he does what the castle will see that night:

‘This guest of summer,
The temple-haunting martlet, does approve,
By his loved mansionry, that the heaven’s breath
Smells wooingly here: no jutty, frieze,
Buttress, nor coign of vantage, but this bird
Hath made his pendent bed and procreant cradle:
Where they most breed and haunt, I have observed,
The air is delicate.’ 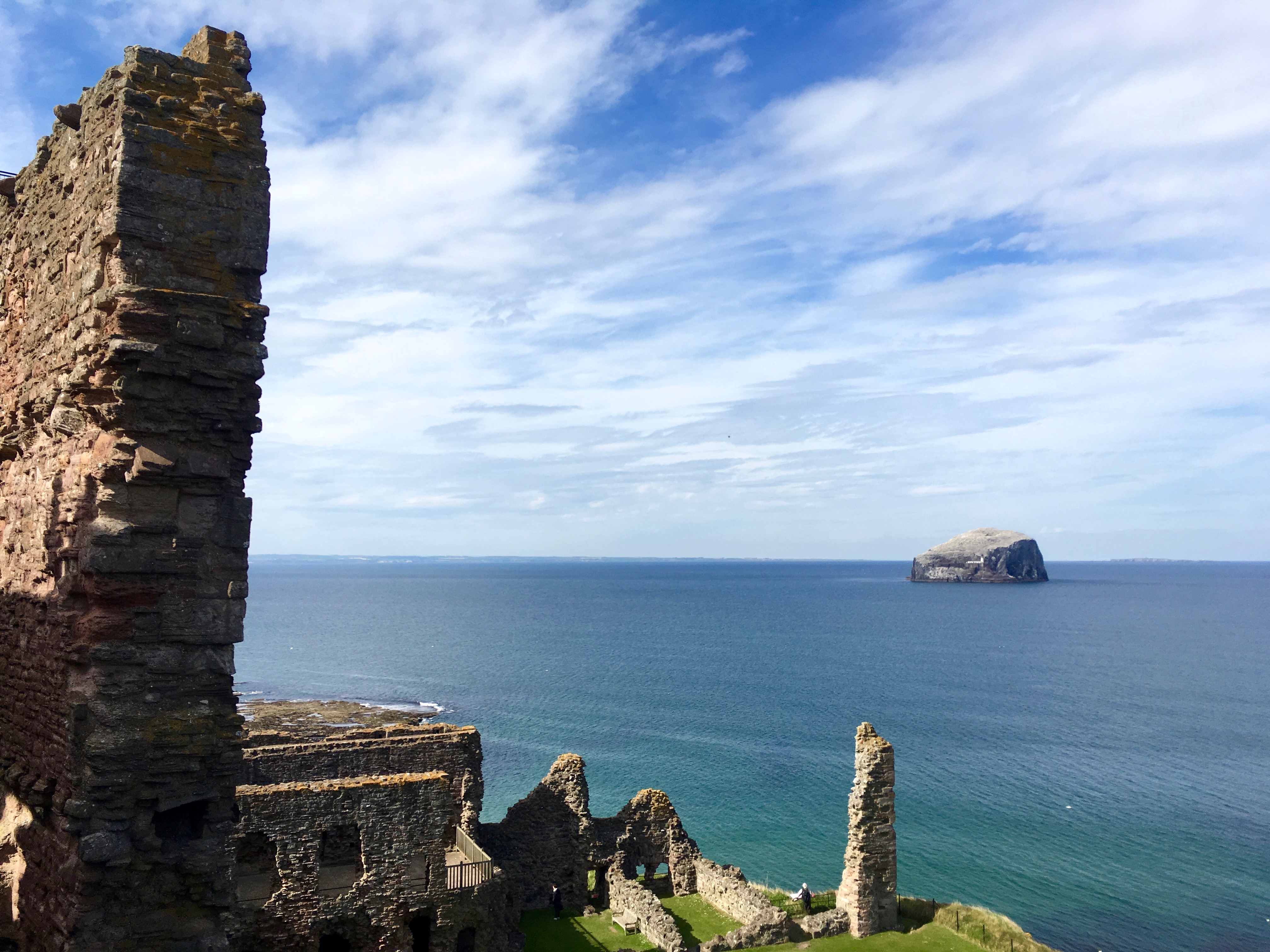 In the near distance the Bass Rock was crowned with its summer cloud of wheeling gannets, for this is their busy season, when they tirelessly scour the seas for fish to feed their ugly babies till they are almost round and unable to move. Then they push them off the ledges, where for weeks they have been cosseted, to the sea far below, and in the sea they flounder about, living on their fat, until somehow they learn to fly and hunt. And hunting is most certainly the word. I lent the field glasses to one of the American academics we were escorting on a study tour: she came from Utah and had seen few seabirds, and never one as spectacular as the gannet, streamlined as a missile, plummeting down from high in the air to take its prey in that spear-like beak far below the surface. ‘O my God,’ she said, ‘There are thousands of them!’ Yes indeed: and in a few short weeks they will all be gone, far, far away to sea. I pointed out below us at the foot of the cliffs a raft of eiders, dowdy ducks in one clump, drakes in their glamorous, even spivvy, smartness, and told her how the drakes, after they have taken their pleasure, migrate far south in bachelor parties while the ladies remain behind to rear the young. She snorted: ‘Men!’- which seemed a bit unfair, as I had never dreamed of doing such a thing. She handed me back the glasses. ‘This is the most beautiful thing I have seen for years. Thank you for bringing us here.’ Funny where a study course on Romanticism takes you.

Two days later, we crossed Lac Leman in the early morning on the ferry to French Yvoire from Swiss Nyon, where boats and trains always run on time to the second. Except they don’t when they are French boats. 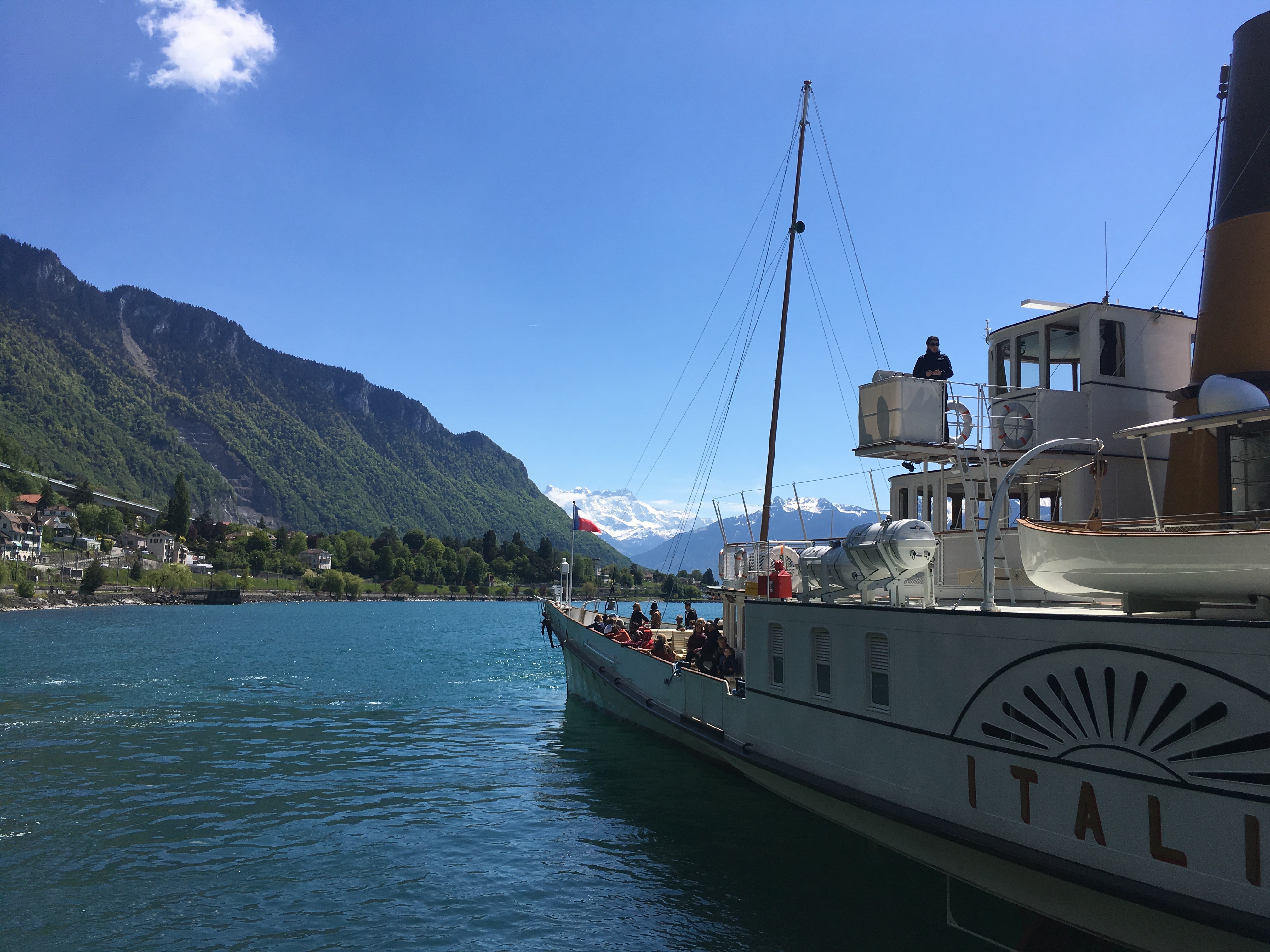 This time the coach company had insisted we had one of their own guides with us, and she mistimed the walk from the railway station to the boat, and we thought we would miss it… but no, the relaxed individual at the gangplank cheerfully said, ‘Don’t bother about hurrying, we are not Swiss, we are French. There is plenty of time.’ And when we got to the other side, and we were briefing our large party about the day’s focus, he came ashore and listened, and said, not wholly jokingly, ‘Can I come with you?’

Why Yvoire? Something as far away from a ruined castle by a restless northern shore and a metropolis of seabirds as is possible to  imagine: an enclosed garden designed in sections to appeal to sight, and smell, and taste, and touch, and the sounds of trickling water and churkling bantams with feathery feet, or indignant blackbirds or bees. 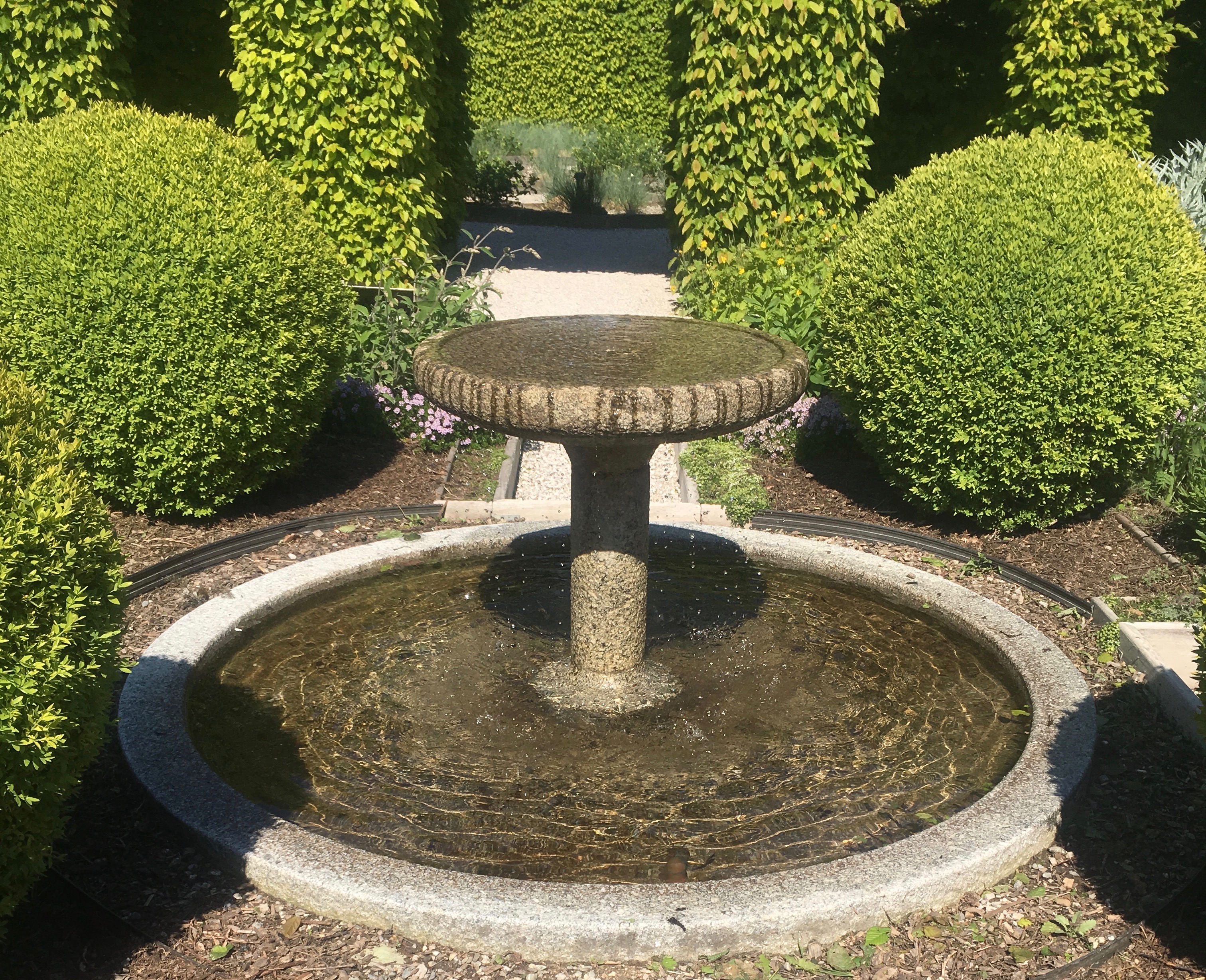 A garden laid out in the fashion and with the beauty of utility, utile et dulce, that the middle ages and Antiquity knew, and which disappeared in Europe’s seventeenth century. A garden where Adam might have been a gardener, revealing in the beauty of geometry and mathematics the inner patterns our eyes are too often too clouded to see.

What wond’rous life in this I lead!

Ripe apples drop about my head;

The luscious clusters of the vine

Upon my mouth do crush their wine;

The nectarine and curious peach

Into my hands themselves do reach;

Stumbling on melons as I pass,

Meanwhile the mind, from pleasure less,

Withdraws into its happiness;

The mind, that ocean where each kind

Does straight its own resemblance find,

Yet it creates, transcending these,

Far other worlds, and other seas;

Annihilating all that’s made

To a green thought in a green shade…

How well the skillful gard’ner drew

Of flow’rs and herbs this dial new,

Where from above the milder sun

Does through a fragrant zodiac run;

And as it works, th’ industrious bee

Computes its time as well as we.

How could such sweet and wholesome hours 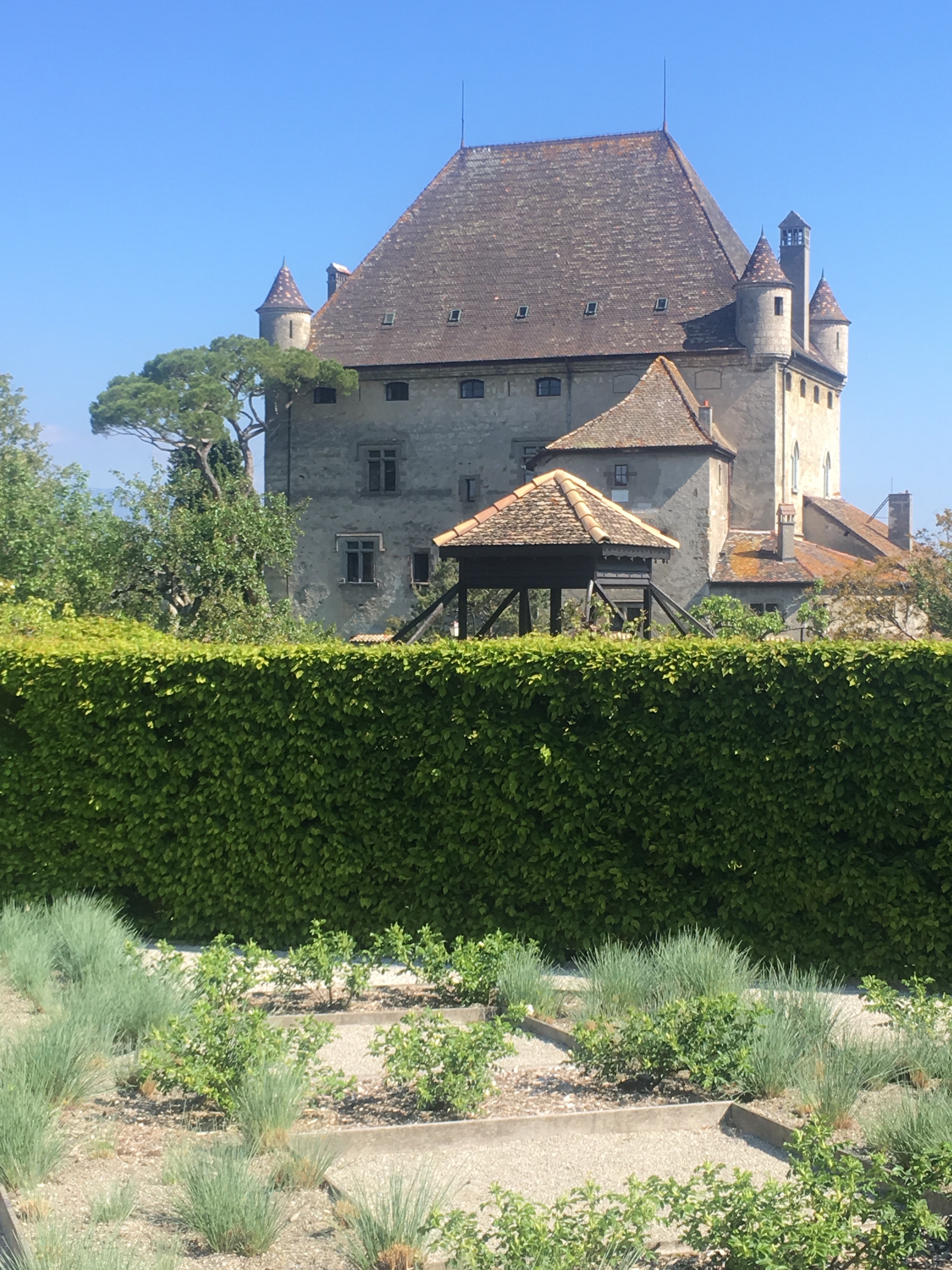 In this place Romanticism, sturm und drang, seem very far away, and it is to Horace’s fons Bandusiae and Andrew Marvell’s Garden to which the mind withdraws, but not from pleasures less. Magic. A possibility of another world. And by the gate of the old town, in the eaves that overhang the old wall where once the portcullis tried to shut out a pressing world, the temple haunting martlets chased, pirouetted, swooped in their tireless pasturing in the fields of air. For summer is short.

To the Mer de Glace, above Chamonix, whither Wordsworth and his friend Robert walked, and then crossed the Alps almost without knowing it, and Byron came, and just down the road Rousseau was born. I last saw it in 1985: the train stop was then only a few feet above the surface of the jumbled, strained, creaking ice. But this time… the shock was so great I could not go down the new stairway that leads down, down, down two hundred feet to the bergschrund melting, melting, melting, and all the ice you can see of the rubble-covered glacier is the opening to the cave cut for tourists. Which they have to try to insulate. Down to the old level the vegetation had stealthily, tentatively, crept over the rock as the glacier had melted after the last Ice Age, almost trying not to be noticed, and it had taken hundreds of years. And now, a mere 34 years later, bare scoured rock all below. 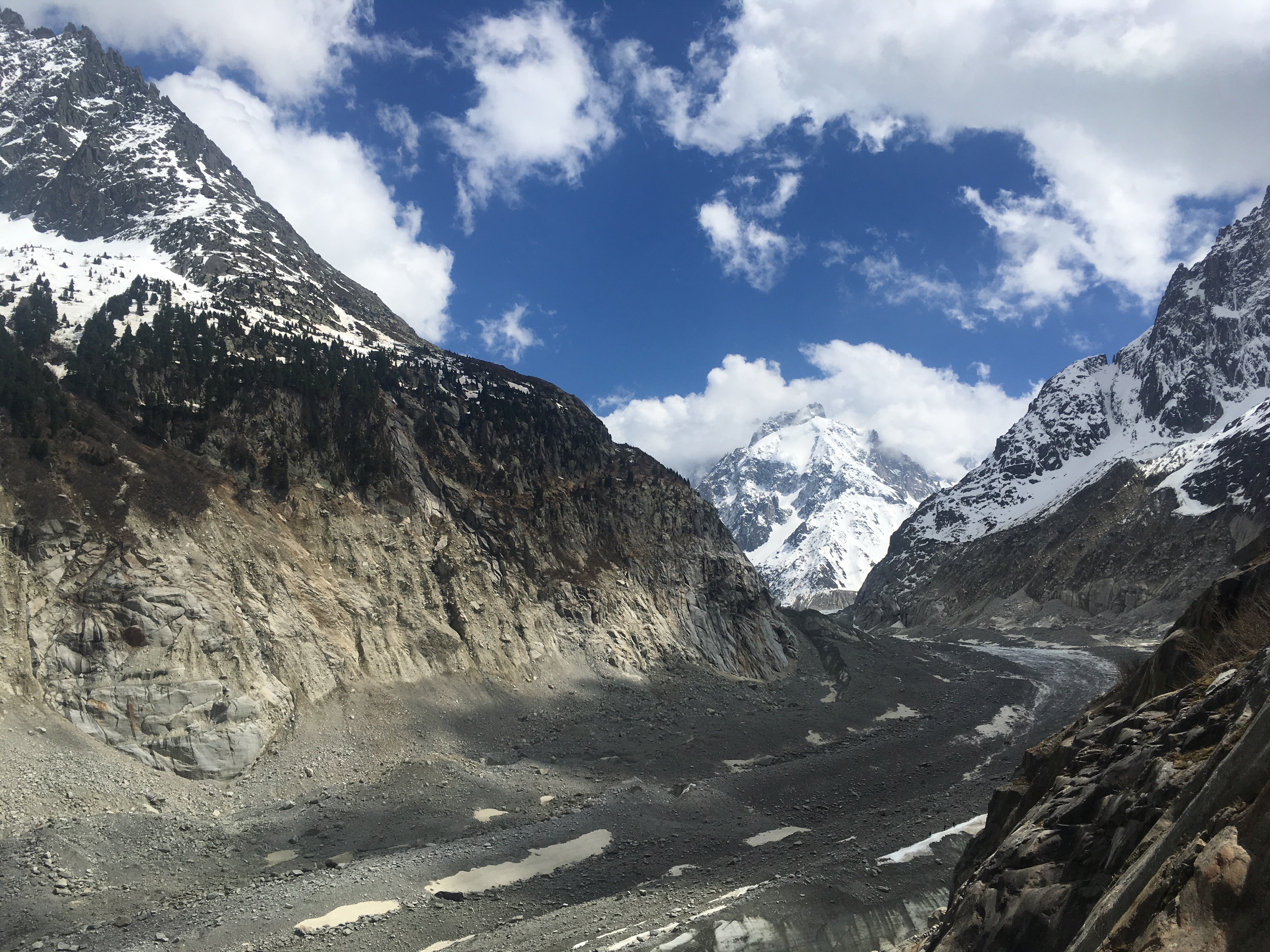 And next month I go back to Spitsbergen, where on many visits since 1976 I have seen the accelerating retreat and shrinking of the ice, the stress on the wild, the tidemark of plastic and everywhere the signs of a garden ravished, spoiled, despoiled. I came back to the bus in a sort of despair. One of the Americans had been quite vociferous that climate change – catastrophe would be a better word – was nonsense, and it was all natural. But all that water melting out of the ice… I pointed out to her that within a few short decades, beyond question, the accelerating melting meant no New York, or New Orleans, no London, or Rotterdam, no Bangladesh. And something went home: the glacier, dirty, ugly, wizened, told her. A day later she came to me and said, ‘this trip has changed my life.’ She is a powerful woman: perhaps she may persuade others in her poor mis-led country. But it may be too late.

Back in the bus, the guide was very keen to tell us about the GNP of Switzerland and the industries and all the statistical information you might not, ever, want. I stopped her, courteously of course, and read Byron’s The Prisoner of Chillon to the group as we drove past that dramatic castle perched on what when Lac Leman was a glacier would have been a little nunatak. It’s not my favourite poem, or even my favourite Byron, but it seemed fitting to read it, and lines at its end seemed oddly significant:

My very chains and I grew friends,

So much a long communion tends

To make us what we are…

As soon, almost, as I had finished, the guide told us where Charlie Chaplin had lived after he was refused return to the USA, his family difficulties, and all the things you need to know while the sun goes down and the further shore, where you remember there is a beautiful garden, grows dim.

We talked the day over, that evening, the two of us, and my wise wife said to my despair, ‘We don’t stop loving our loved ones just because they are wounded or damaged.  We just need to keep loving our wounded earth as best we can’.

Delighted with this review of my book in Current A

Delighted to report that today the post brought me