My wife was only yesterday sticking needles in me, for the second time this week. Be re-assured: this is not anything reprehensible:  I allowed her, nay, encouraged her, for she has no evil intent. Far from it: I have benefited from what she does before, and this time the crisis was a back so badly pulled that I had difficulty sitting or lying or driving and yelped involuntarily when I had to move unexpectedly. Her acupuncture – she is a very skilled and experienced acupuncturist – has helped many people over many years, and I first experienced its effects when in a matter of hours she cleared up a troublesome tickly cough that had bothered me for weeks. Then there was a really long-term and sometimes acute bursitis which she sorted out in twenty minutes. So I am wax in her smooth hands, and meekly try to do what she says afterwards about not straining things. The danger point, she tells me, is when you are beginning to feel better, and overtax the recovering body. I am not always very successful in obeying her and she can be fierce. Oh yes, she can be fierce…

The back was the result, I suspect, of some pretty intensive work on the house we are doing up – though the worst strain I ever had, years, ago was done by getting out of an armchair. (That’ll teach me to sit still…) 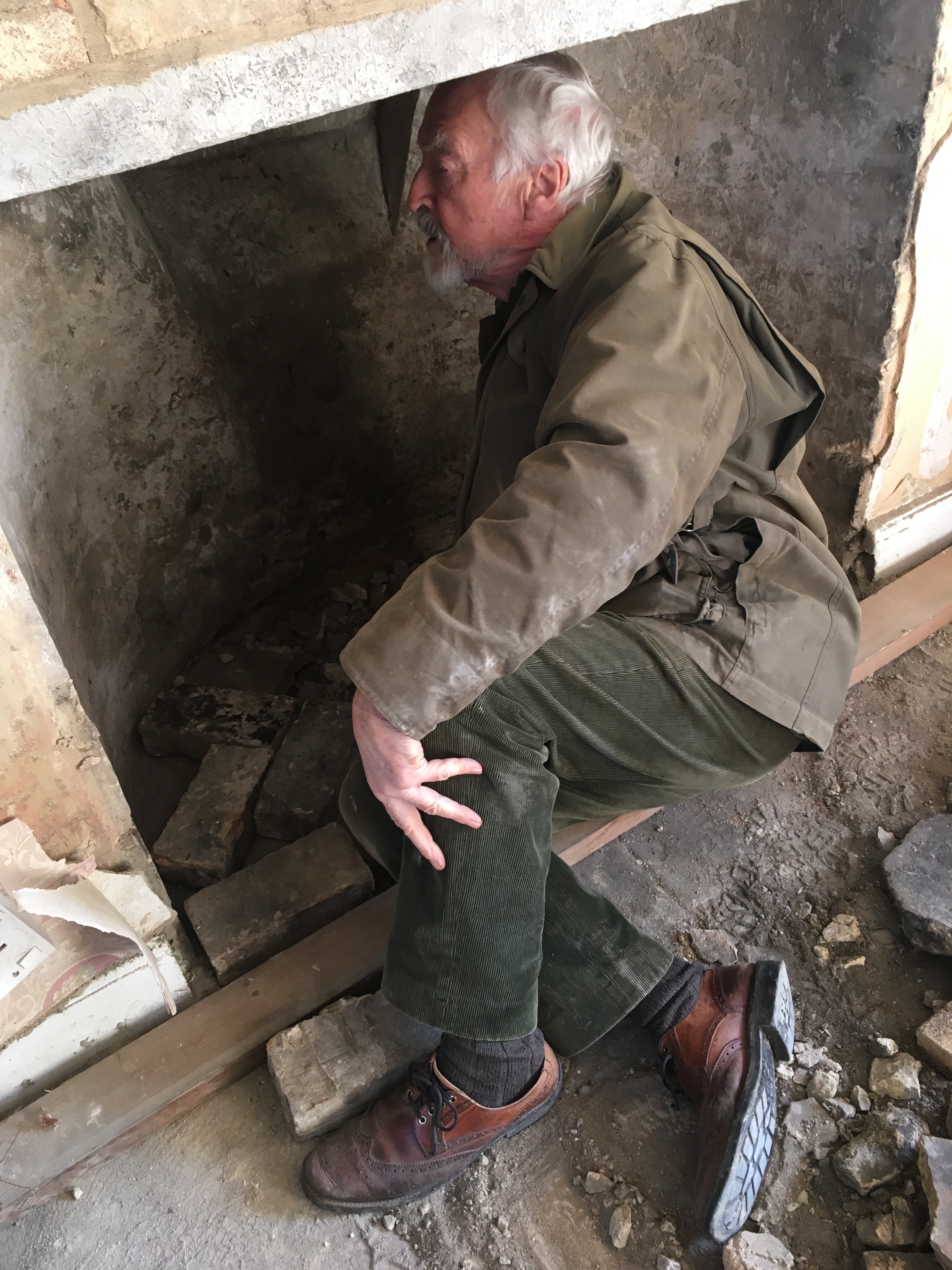 The house is a pretty place, dating from about 1776, and has been well looked after, but without serious modernisation. We are just passing the demolition and taking things to bits stage at the moment, which for me has been a lot of fun, though we did not find as much hidden as one would expect in a house of that age: no builder’s sacrifice of a cock, no witchburns, no hidden money or objects. We ended up with only a packet of Woodbines (empty, about 1950), a copy of the Cambridge Evening News for 1964 telling the world that the H-bomb could be used to cut a new Panama Canal and offering television sets in teak, and a single high heeled woman’s right shoe – about 1940. (Sometimes shoes were walled up, as this probably was, to bring luck – rather like the old custom of throwing a boot after a newly married couple as they left the reception.) 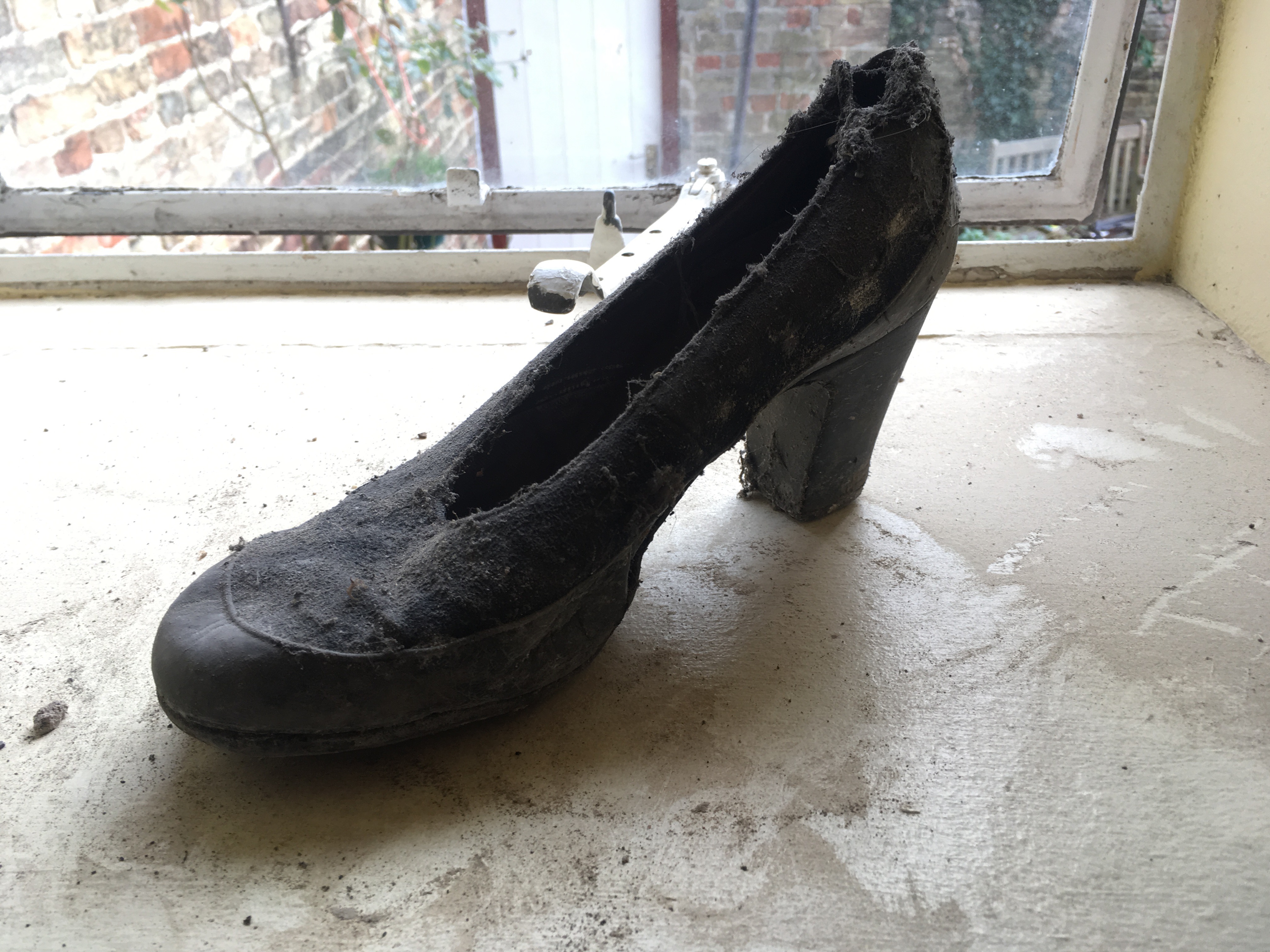 In the trench dug for the 4 drains there were only bits of coal and cinders, bits of brick, and then we were down to what the archaeologists call ‘the natural’ – Kimmeridge clay, and heavy stuff. Even that, usually pretty rich in Jurassic fossils, gave up no secrets, only one single gryphaea – but it was a magnificent specimen, by far the biggest I have ever seen, as big as my fist. It will take a proud place in our Cabinet of Curiosities. 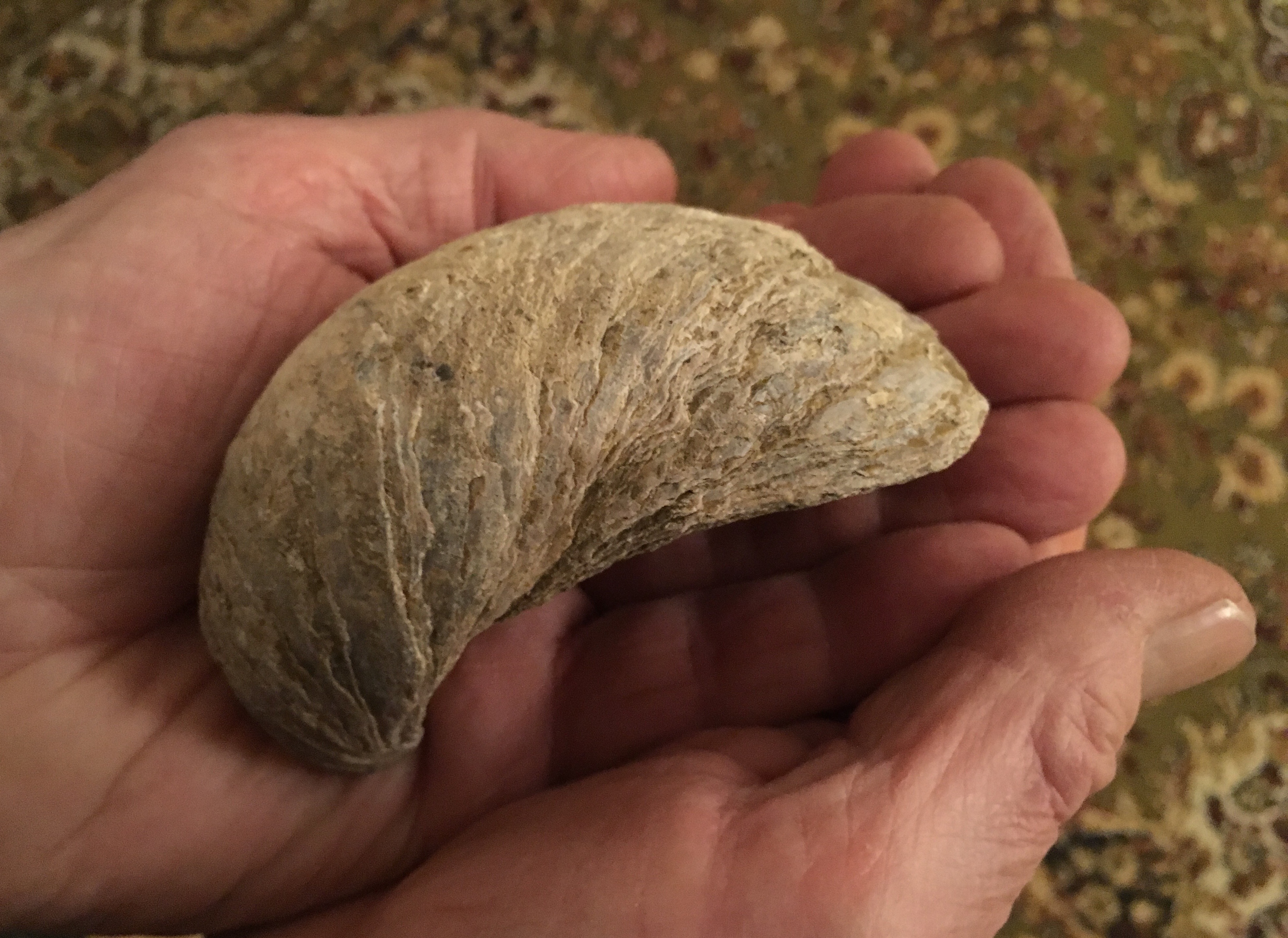 The house feels good. Everyone who comes in to what is in effect for the moment the building site remarks on the good feel it has. Indeed, I am convinced places have memory – not, obviously, in our sense, but rather as clothes keep the odour of someone who wore them, or the handle of a tool remembers the smoothing of the palms that held it. (That is one of the reasons why I love working with old tools, like Seth’s hammers or my father’s spade.) Places hold more than fossils. They dimly hold feelings and passions. You do not need to know that 240 Cathars were burned alive at the stake there on a single day, 12 March 1244, to feel there is something terrible in the feel of Montségur. My wife’s daughter, as a young teenager, only sketchily aware of such knowledge, found herself physically unable to enter the ruins when her parents took her there, so overwhelmed was she by its oppressive heaviness. There are many other such dark places, like the vast sunny summer fields of Flanders, with corn white unto harvest, with now only the occasional poppy nodding among the heavy ears. When I myself was in Rome, I intended to do the job properly and go into the Colosseum, explore its intricate underground works, think about how the building functioned – it is a work almost of genius – but each time I tried I found I could not. I could feel the tensions rising, and a light sweat was on my palms. I could not get out of my head what had been normal in that clever place.   Much, much later, having forced myself to go in to the arena at Verona because it was where so much grand(iose) opera – which I love – had been staged, I had to turn back as the cold stone vaults dripped animal and human fear – and a prurient delight in seeing pain. 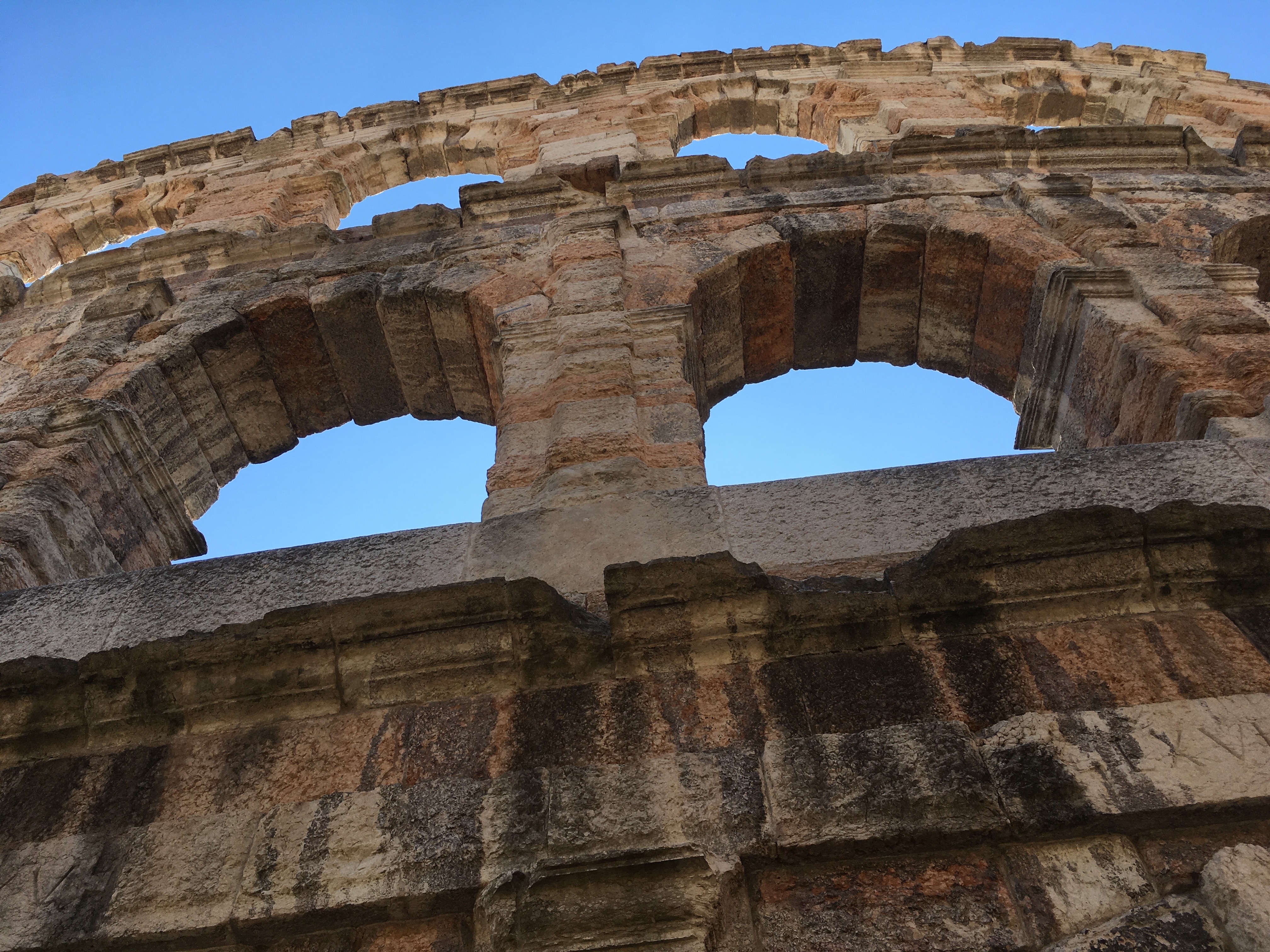 But, like the house, there are other places, holy places, too, where the walls between the worlds are very thin: Florence’s San Miniato al Monte; 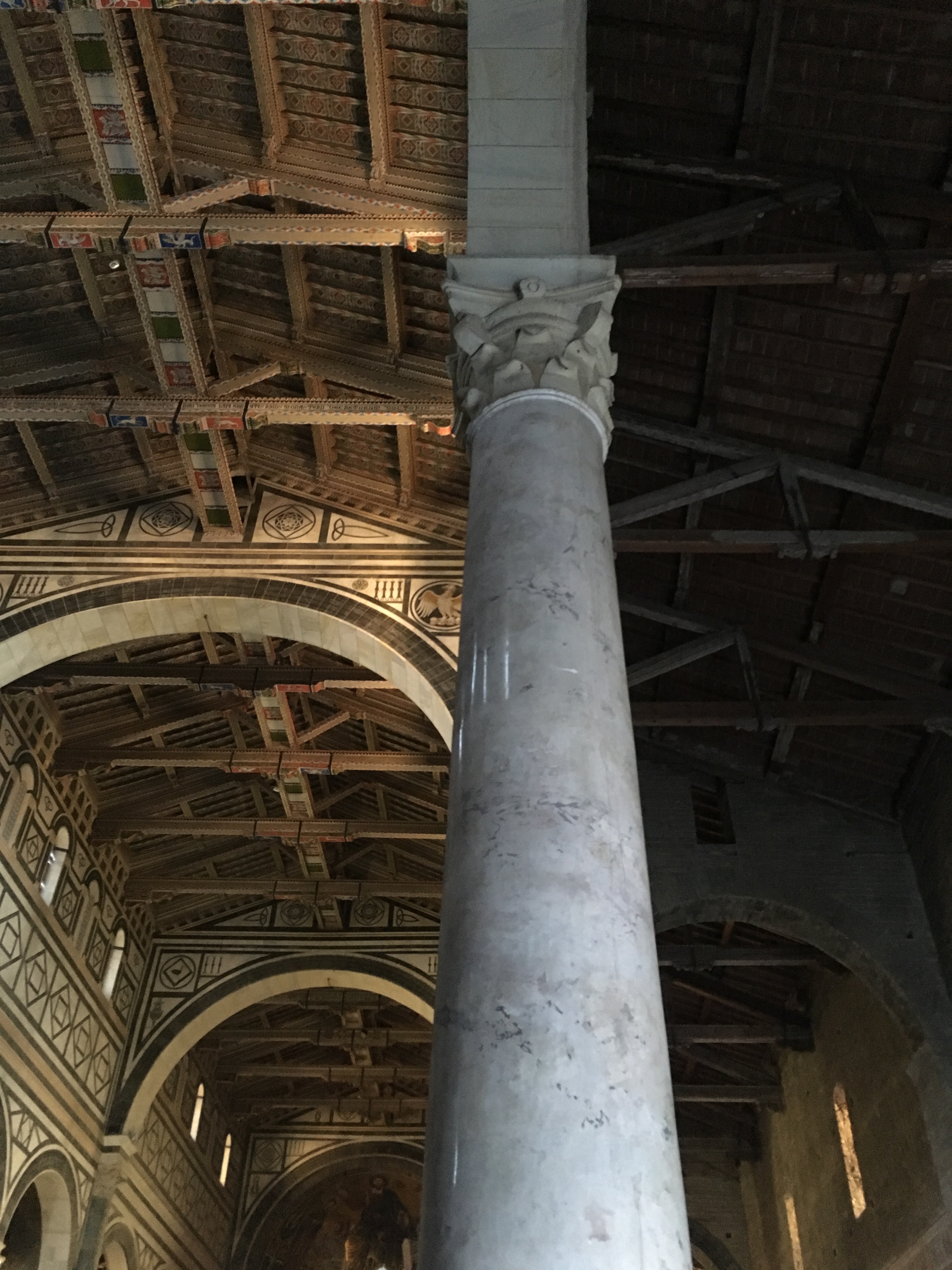 Brixworth, Delphi, Little Gidding, Iona; an ugly little church in Norfolk; a pool I know shaded by alders where the young stream escapes from the prison of the rock and the tiny shrimps dart in the inch-deep clarity as they sense my footfall.  Numen inest. The place itself cannot forget. And we are the consequences of all the past, of what for others were memories.

The delight and dangers of this form of writing is that it can turn into mere rambling. It is doing… The fact, though, that I am able to sit at the desk and do this, letting thoughts ramble, is a tribute to the Lady With The Needles, on whom be all blessing. She got very cross with me this morning when she came in and found me kneeling down and lifting pamments from the floor of what will be the dining room, for she said I was risking undoing all her work.  As it happens, no was harm done. But she was right: respect the professional not only for their skill but also their advice and experience, and take heed of their warnings. I tell others that, but find it oh so hard to take my own advice.