A couple of weeks ago (before everyone decided it was spring …), sharp, bright, with a hard frost, we had a day off. We woke later than usual, which, conscience quiet, gave a sense of holiday. We decided we would walk down to the washes of the Cam, for when I had driven past at sunset a few days before the water they hold in winter was covered with flocks of migrant waterfowl – pintail, pochard, tufted duck, widgeon, and the geese I love. (I have reservations about the aggressive and invasive Canadas, to be sure, but the pinkfeets and the greylags are always welcome visitors back from the far, far north.) I stopped the engine, and the quiet sunset was filled with the whistle of widgeon, the indignation of mallard, and the parleying of geese. Worth coming back to listen and see properly, I thought. 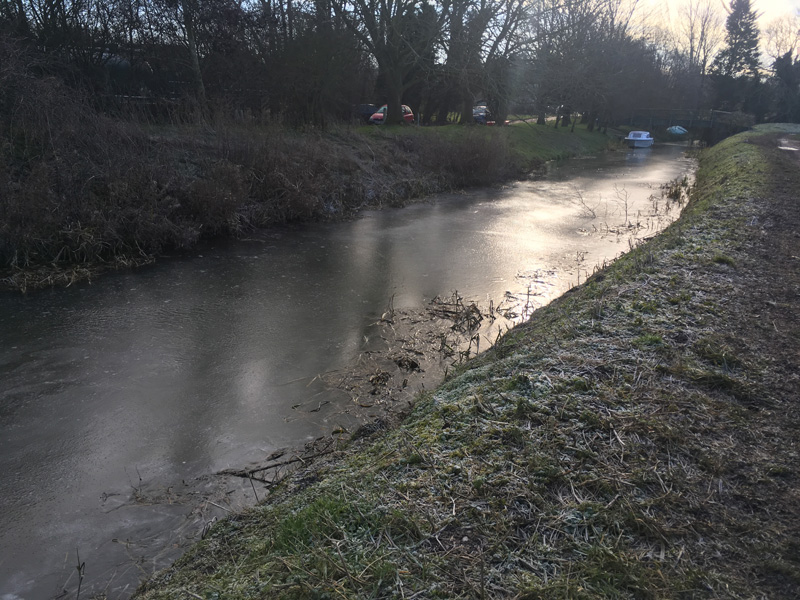 My new gumboots are far heavier than the old ones, friends who gave up their soles recently, and I would feel that extra weight after some six miles. But they do have thick soles, and the ruts on the droveway would be hard to the feet. When we crossed the bridge at the bottom of the lane we could see our little river, slow at the best of times, was gripped by the ice, even where it is sheltered by trees and steep banks at the bottom of the garden. Where it widens out, by the hythe where decades ago the barges used to unload, the swans had been keeping the water open. When the ice gets thicker, more than thin cat ice, they clamber up, a picture of ungainliness, onto to the edge and their weight is usually enough to break a substantial sheet free, which then slides over the unbroken ice and freezes there. So you have a pattern of triangles which in low sun is picked out by shadows of the tiny lee of the overlapping plates. This is not a real freeze, of course: I have seen – but it is long ago now – the river frozen for miles, and people skating from village to village (more about which you can find in my book Out of Reach, re-published in 2011 by G.David, in my opinion the best bookseller in Cambridge). 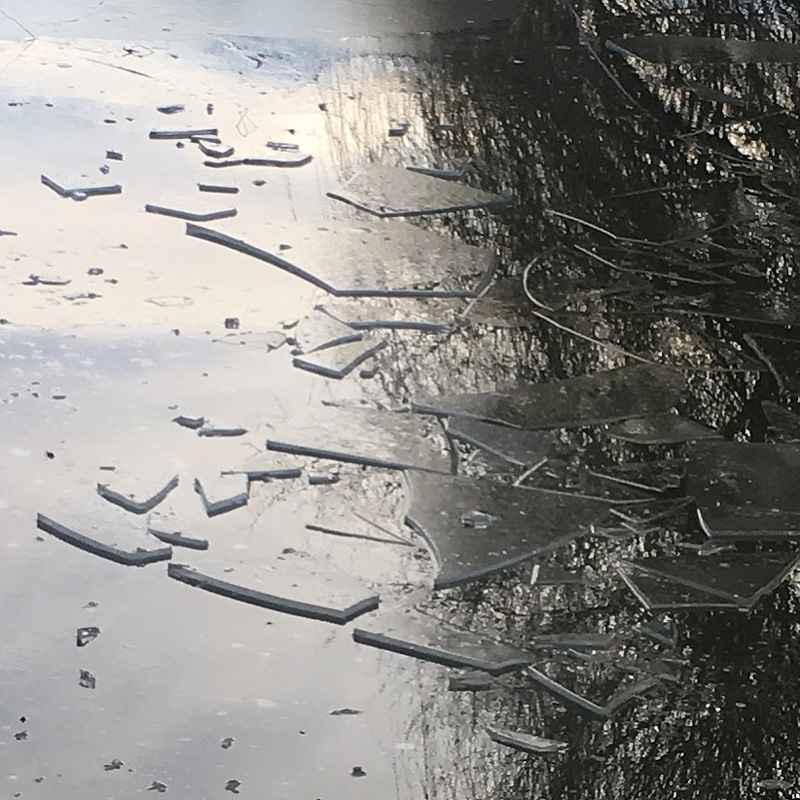 I digress… but it does not matter: I am not writing in my best suit, as it were. The bank stretches straight for miles, bends a little where another lode – that is what they call these canalised rivers of the Fens – joins, and then runs straight again to the lock into the Cam. Being high above the drained fields, you can see for miles, and in this light everything is as sharp as a pin. The winter wheat is reaching its slim fingers up to the sun, the long green lines of the drills ruling the black soil of the fen almost to a vanishing point way across the huge field. Beyond the field, the main drain takes the water to be lifted out of the Fen by the pump down on Cam bank. On the other side of the river, the National Trust has bought the land for re-wilding. Looking that way we have the sun at our backs, and seeing is easier. The flashes – not as much water as last year, by a long chalk – are frozen, and hundreds of birds are standing or sitting on the ice. Nearest, greylags, heads under wings, with one old goose sentinel. By the old willow tree that has had its feet in water for years, a few Canadas, and a solitary, smart shelduck. I do hope its mate arrives soon. In the bare branches, two cormorants. But beyond, a huge flock of widgeon, and another of mallard: for the species tend to keep themselves to themselves, not speaking each others’ language, almost pointedly ignoring each other. Suddenly, for no reason I can see, the flock takes off with a clamour of wings, up into the sky in tight array, and wheels round excitedly over the ice as if to set off now, but now, let’s be going, early as the year is, back to the north to breed. They will do that in earnest next month. But that little wingstretch over, they lose height once more in a graceful fast curve, and, webbed feet extended, come in to – well, not land, but you know what I mean. Through the glasses I can see several who slightly misjudge, and slide along the smooth ice, bumping into their unimpressed fellows. What secret life do they have? 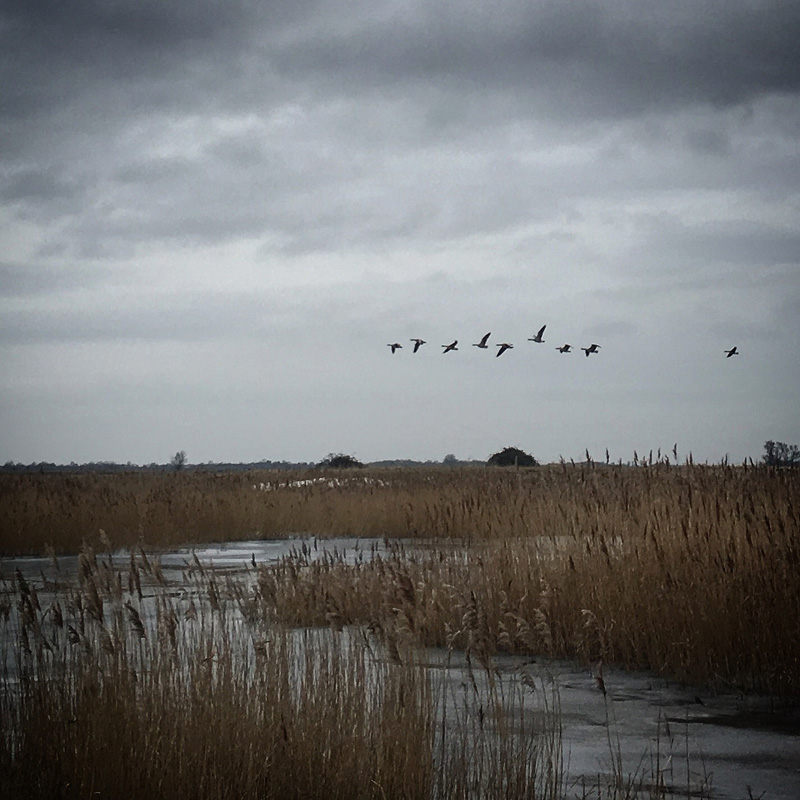 We walked back along the quiet Fen road, buckled and heaved by the shrinking of the ground – peat is a weak subsoil – and the weight of modern farm traffic. We pass the place where they wash carrots and waste so many because they are not quite the right shape or size and ‘The Housewife’ – a very dodgy concept – will not buy them. Did anybody ask? Or is it one more example of the tyranny of the supermarkets? I once asked a stall selling Fen carrots on Cambridge market if they had any dirty carrots, because they really do keep better. ‘Never get asked for them, sir.’’ But I am asking for them?’ ‘But there’s no call for them, sir…’ (This could go on for a long time…) Once upon a time I used to go and get a few bucketsful from the heap of waste to feed to our hens and the horse – and of course we had a few ourselves. Perfectly eatable. But they did not keep. Near the village we meet a runner in a high vis vest panting along, and on a lead he has a diminutive Chihuahua running like blazes to keep up. It’s one way of giving a dog a run, but I am sorry for the dog.

And so home to my beloved’s soup and olive sourdough bread. A good morning.