‘Dreich’: the word Rosanna used as we opened the curtains this late January morning was perfect: the Scots expresses the dourness, the glumness, the greyness of a day that is neither cold nor warm, just dull, still, sitting on your spirits, with even the woodpigeons not bothering to tell each other, ‘My toe hurts, Betty!’  I chose not to go down the Fen on a doolie day like this for my pre-breakfast walk, and so set off up what they call a hill round here – though to a man brought up in sight of the fells and moorlands up north the word does still seem optimistic. Still, from its 35 foot summit you can see for miles – at least, you can on a clear day – even to the tower of Cambridge University Library, and Addenbrooke’s hospital, and Ely Cathedral. But not on a day like this. 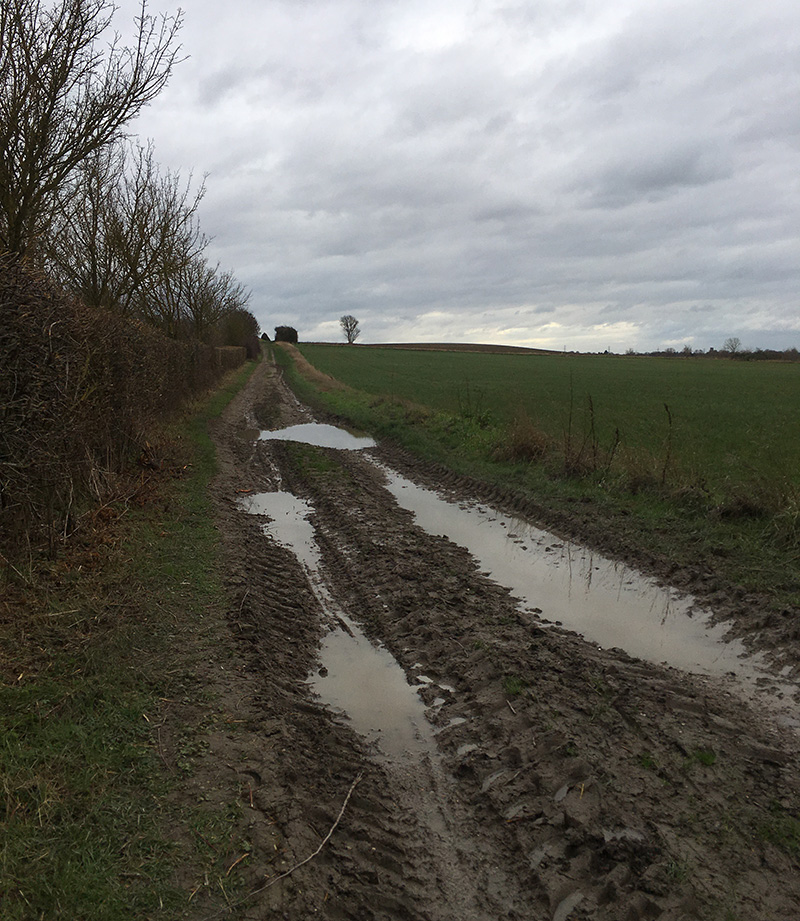 Going up the track with the lime and chestnut trees on one hand and Michael’s new yew hedge (growing nicely now) on the other, it was so hard not once again to grieve for dear Hector the Labrador, who would always choose this start to his busy walk if I gave him the choice. I do miss that tail waving a few paces ahead, and the important look on his face as he chose the place for his first squat. There has not been a lot of rain, but the slight frost is coming out of the marly ground, and where a tractor has run along – Andrew, I guess, going up to see to his portly Dexters – the soil is sticky.  I get into a nice rhythm in the wood, which is ideal for going into deep thought and a sort of half-awareness of one’s context. I find that useful when I am trying to sort out an intractable problem. The one that preoccupies me at the moment, almost obsessively, is how to structure the new book I am writing, what to call it, how to focus its themes. My agents, A. M. Heath, who have handled three books of mine, say they love the writing but it crosses so many marketing categories they will have difficulty getting a publisher to take it. (I quoted to Bill what old Mr Bertram Foyle said to me the first day I joined his publishing firm: ‘Forget all that fine writing, dear boy, just remember that books have to sell, just like frozen peas. Your poor wife can’t buy nice clothes on fine writing.’ Bill nodded, sadly.) As the book is at present, it’s a travelogue, a memoir of many things, place and people, a pilgrimage of sorts to some sort of acceptance of what we are as humans: both the glorious and the vicious are in each and every one of us. It goes from the amphitheatres of Rome to the gulags and the Holocaust – via the glory of Bach, the vision of Dante, the wisdom of Plato and Gothic arches aspiring to the uncreated light – and the fellowship and friendliness of food shared by a southern sea, and wine pressed on a guest who did not share their language and was born of their ancient enemy, in a little gasthof somewhere near Dachau.

Well, let the mind play on the problem: and then let the subconscious, synthesising, mind get to work, and I may wake up with the solution one morning and spend the next week of waking hours furiously drafting it, oblivious to all except food and drink accepted with a grunt. It has happened before. But not predictably. Writing is bloody hard work and the rewards can be infinite, but materially small.

I stopped to talk to Ron’s ram. He is not writing a book. We have been introduced, but I can never remember his name. He chews thoughtfully, with that sideways motions I can’t imitate. (My mother: ‘Empty your mouth when you are talking to someone!’)  He’s a friendly sort of beast and likes having his forehead scratched. But he can decide to butt you with that hard head, and as he weighs well over a hundredweight, watch the look in his yellow eye with its mandorla of black pupil. I suppose it is the nearest thing he can get to being playful. Once he was a charming lamb weighing a few pounds, who butted his fellows off the bales of hay, did not have a huge appendage to encumber his frolics, and who did not have stern duties to perform. But those duties are over now, for this year, and all he has to do is eat his head off. Does he dream? I wonder. Of what? 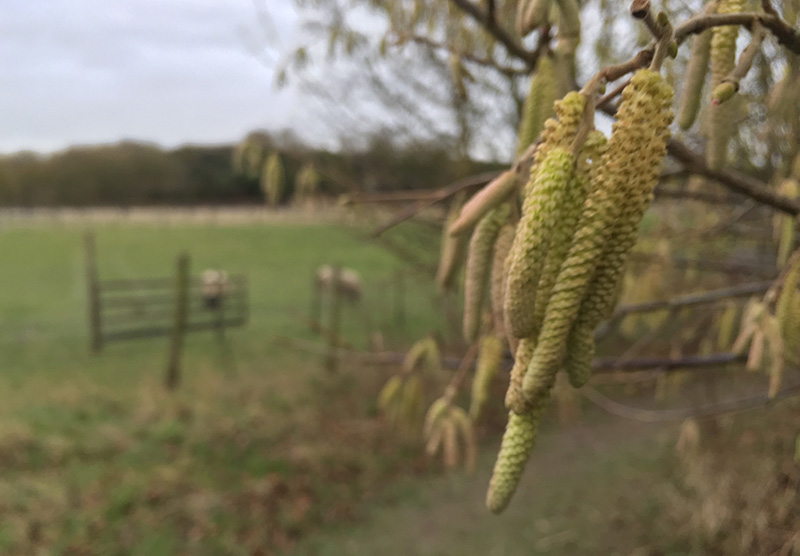 The catkins are dangling like lamb’s tails from the hazels. The bush at the corner by the very best of last year’s blackberry bushes – the old countryfolk called them ‘mulberry’ bushes – is covered with them. Not a bit of wind stirs their yellow delicacy. A chaffinch is trying out its spring song. Too early chum: there is a lot of weather to come. In the shade, where a frozen puddle has drained overnight, a lattice of white ice needles hovers over the dark mud.  In the grove by the track going down to the Green snowdrops – I love their French name,perce-neige– are out, great patches of them under the bare trees. The green is deserted. But in this still air sound carries. A quarter of a mile away someone slams a door– so it sounds like – and the whole village echoes. (Not Ibsen’s Nora, I am sure.)  I slip into church, read part of the Book of Amos the Prophet – golly, how up to date he sounds, with his diatribes about corrupt business swindling (give it its right name) the poor! – and some of wise St Paul’s humane advice to his beloved Corinthians. Now, with thanks, time for breakfast.

Not so dreich, after all.